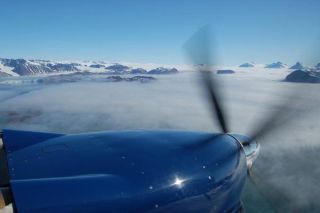 The dwindling sea ice of the Arctic Ocean is a major concern in a warming world. But while scientists have long been able to use satellites to chart how fast the ice is disappearing from areas of the Arctic, measuring the thickness of the remaining ice is trickier.

German scientists who usually use computer models to study Arctic ice and climate change are flying over the frozen ocean this week to measure the ice thickness in an area north and east of Greenland.

"Taking off on the measurement flights from Station Nord here is a special adventure," said Rüdiger Gerdes from the Alfred Wegener Institute for Polar and Marine Research, based in Bremerhaven, Germany. "Flying through virtually unsettled regions of the Arctic in the high-tech research aircraft is a stark contrast to my modeling work on the computer."

The Arctic is particularly sensitive to climate change and has been experiencing more and faster changes than many other parts of the globe. One of the most noticeable effects has been in the summertime melting of the ice that covers the Arctic Ocean much of the year. Some estimates suggest the Arctic could be ice-free in just 30 years.

Arctic ice naturally melts during the Northern Hemisphere summer, refreezing again come winter, but in recent years that summer melt has far exceeded the average. In 2007, the extent of remaining sea ice was the lowest on record, an estimated 1.65 million square miles (4.28 million square kilometers). That was 39 percent below the long-term average from 1979 to 2000 (the period that satellites have been keeping measurements of sea-ice extent). The record melt opened up the fabled Northwest Passage.

The melt in succeeding years hasn't been as steep, though still much higher than the average. That record-breaking summer of ice melt also saw the disappearance of much older, thicker ice that is usually resistant to the summer melt.

The area near Greenland that interests Gerdes and his team contains ice that is several years old and particularly thick.

To get an accurate accounting there, Gerdes and his colleagues will be flying in the research aircraft Polar 5 and using an instrument called EM-Bird, an electromagnetic measuring device that is towed over the ice.

"I'm very keen on seeing the results of the sea ice thickness measurements," Gerdes said. "Only when we know the distribution of ice of varying thickness can we calculate how much freshwater is carried out of the Arctic Ocean via ice."

The team conducted its first test flight Aug. 18 and took measurements over the course of the following two days, said Folke Mehrtens, a communications officer for the Alfred Wegener Institute, which is part of the Helmholtz Association of German Research Centers.

"I got an e-mail from campaign leader Rüdiger Gerdes yesterday that three long transects have been finished successfully, registering sea ice thickness and several other parameters," Mehrtens said.