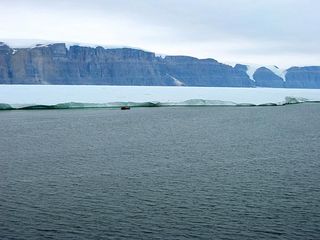 A chunk of ice four times the size of Manhattan has calved from Greenland's Petermann Glacier, scientists announced today.

The last time the Arctic lost such a large chunk of ice was in 1962.

"In the early morning hours of August 5, 2010, an ice island four times the size of Manhattan was born in northern Greenland," said Andreas Muenchow, associate professor of physical ocean science and engineering at the University of Delaware.

Satellite imagery of this remote area at 81 degrees north latitude and 61 degrees west longitude, about 620 miles (1,000 kilometers) south of the North Pole, reveals that Petermann Glacier lost about one-quarter of its 43-mile- (70-km-) long floating ice-shelf.

Petermann Glacier, the parent of the new ice island, is one of the two largest remaining glaciers in Greenland that terminate in floating shelves. The glacier connects the great Greenland ice sheet directly with the ocean.

The new ice island has an area of at least 100 square miles (260 square kilometers) and a thickness up to half the height of the Empire State Building, which is 1,454 feet (443 meters) from the ground to the top of its lightning rod.

"The freshwater stored in this ice island could keep the Delaware or Hudson rivers flowing for more than two years. It could also keep all U.S. public tap water flowing for 120 days," Muenchow said.

The island will enter Nares Strait, a deep waterway between northern Greenland and Canada where, since 2003, a University of Delaware ocean and ice observing array has been maintained by Muenchow with collaborators in Oregon, British Columbia, and England.

"In Nares Strait, the ice island will encounter real islands that are all much smaller in size," Muenchow said. "The newly born ice-island may become land-fast, block the channel, or it may break into smaller pieces as it is propelled south by the prevailing ocean currents. From there, it will likely follow along the coasts of Baffin Island and Labrador, to reach the Atlantic within the next two years."

In July, a chunk of ice the size of Manhattan fell off of Greenland's Jakobshavn Isbrae glacier .