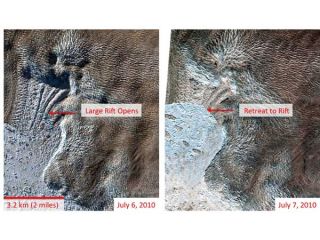 A huge chunk of ice about one-eighth the size of Manhattan has broken off of Greenland's Jakobshavn Isbrae glacier, NASA scientists report.

A 2.7-square-mile (7-square-kilometer) section of the glacier broke up on July 6 and 7 and was spotted in NASA satellite images.

Greenland's ice sheet, which is 2 miles (3.2 km) thick and covers an area about the size of Mexico, has been losing ice mass at an accelerating rate over the last decade. The ice sheet discharges much of its ice through fast moving glaciers that flow into the sea, with large chunks breaking off into the ocean.

The breakup last week pushed the calving front – where the ice sheet meets the ocean – back nearly a mile (1.5 km) in one day. The front is now farther inland than at any time previously observed.

Research teams led by Ian Howat of the Byrd Polar Research Center at Ohio State University and Paul Morin, director of the Antarctic Geospatial Information Center at the University of Minnesota have been monitoring satellite images for changes in the Greenland ice sheet and its outlet glaciers.

While the recent breakup itself is not unusual, Howat noted, detecting it within hours and at such fine detail is a new phenomenon for scientists.

The breakup could be connected to global warming as climate change has resulted in warmer Arctic Ocean waters.

"While there have been ice breakouts of this magnitude from Jakobshavn and other glaciers in the past, this event is unusual because it occurs on the heels of a warm winter that saw no sea ice form in the surrounding bay," said Thomas Wagner, cryospheric program scientist at NASA Headquarters in Washington, D.C. "While the exact relationship between these events is being determined, it lends credence to the theory that warming of the oceans is responsible for the ice loss observed throughout Greenland and Antarctica."

Jakobshavn Isbrae is located on the west coast of Greenland at 69 degrees north latitude and has retreated more than 27 miles (45 km) over the past 160 years — 6 miles (10 km) in just the past decade. As the glacier has retreated, it has broken into a northern and southern branch. The breakup this week occurred in the north branch. Scientists estimate that as much as 10 percent of all ice lost from Greenland is coming from Jakobshavn, which is also believed to be the single largest contributor to sea level rise in the Northern Hemisphere.

Scientists are more concerned about losses from the south branch of the Jakobshavn, as the topography is flatter and lower than in the northern branch.