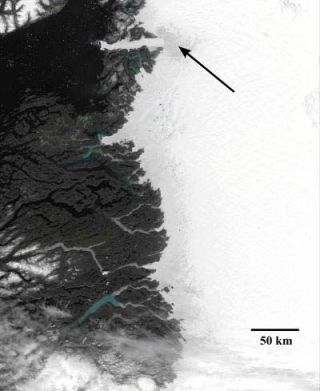 Satellite image of Western Greenland. Narrow grey band in center is melting ice, between the rocky coast to the left (west) and thicker, non-melting, higher altitude ice to the right (east). Small lakes form in this region during the summer. Arrow points to darker grey zone of rapidly thinning ice near the outlet of Jacobshavn glacier, which also loses mass due to iceberg calving.
(Image: © NASA)

The ice is melting so fast in Greenland that the giant island is rising noticeably as the weight is lifted. In some spots, the land is rising 1 inch per year.

A vast ice cap covers much of Greenland, in some places up to 1.2 miles (2 km) thick. The ice, in place for eons, presses down the land, making the elevation at any given point lower than it would be sans ice.

Scientists have documented on Greenland and elsewhere that when longstanding ice melts away, the land rebounds. Even the European Alps are rising as glaciers melt.

Now, scientists at the University of Miami say Greenland's ice is melting so quickly that the land underneath is rising at an accelerated pace.

Some coastal areas are going up by nearly 1 inch per year, the scientists announced today. If current trends continue, that could accelerate to as much as 2 inches per year by 2025, said Tim Dixon, professor of geophysics at the University of Miami Rosenstiel School of Marine and Atmospheric Science (RSMAS) and principal investigator of the study.

"It's been known for several years that climate change is contributing to the melting of Greenland's ice sheet," Dixon said in a statement. "What's surprising, and a bit worrisome, is that the ice is melting so fast that we can actually see the land uplift in response."

Dixon added: "Even more surprising, the rise seems to be accelerating, implying that melting is accelerating."

The results, based on a study of data from global positioning system (GPS) receivers stationed on the rocky shores of Greenland, were published online by the journal Nature Geoscience. The data stretches back to 1995.

"During ice ages and in times of ice accumulation, the ice suppresses the land," explained Shimon Wdowinski, research associate professor in the University of Miami RSMAS, and co-author of the study. "When the ice melts, the land rebounds upwards," Wdowinski said. "Our study is consistent with a number of global warming indicators, confirming that ice melt and sea-level rise are real and becoming significant."

The measurements are restricted to places where rock is exposed, limiting the study to coastal areas. However, previous data indicate that ice in Greenland's interior is in approximate balance: Yearly losses from ice melting and flowing toward the coast are balanced by new snow accumulation, which gradually turns to ice. Most ice loss occurs at the warmer coast, through melting and iceberg calving and where the GPS data are most sensitive to changes. In western Greenland, the uplift seems to have started in the late 1990's.

"Greenland's ice melt is very important because it has a big impact on global sea-level rise," Jiang said. "We hope that our work reaches the general public and that this information is considered by policy makers."

This work was supported by the National Science Foundation and NASA.