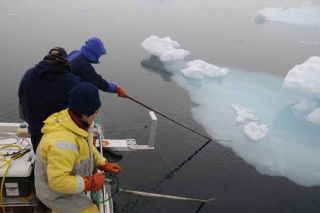 Waters from warmer parts of the ocean are penetrating into the normally chilly fjords of the Greenland coast, driving some of the glacier melt that has been gathering speed there in recent years, a new study finds.

"This is the first time we've seen waters this warm in any of the fjords in Greenland," said study leader Fiamma Straneo, a physical oceanographer from the Woods Hole Oceanographic Institution (WHOI) in Massachusetts.

Fjords are steep inlets carved out by glaciers over millions of years. Greenland's ice sheet, which is two-miles thick (3.2 km) and covers an area about the size of Mexico, has been losing ice mass at an accelerating rate over the last decade. The ice sheet discharges much of its ice through fast moving glaciers that flow through these narrow fjords.

This ice melt is a concern because it contributes to the sea level rise expected to occur as a result of global warming. Enough ice exists in the sheet to raise global sea levels by about 23 feet (7 meters). The Greenland ice sheet's contribution to sea level rise over the last decade has doubled because of the increased melting and the faster flow of so-called outlet glaciers that run from the interior of the Arctic island out to sea.

Scientists have known that some of the melting has been caused by warming air temperatures — the result of the warming effect of greenhouse gases that have accumulated in Earth's atmosphere for many decades. But the ocean's impact on this melt — particularly that of ocean currents — is just beginning to be understood.

"Among the mechanisms that we suspected might be triggering this acceleration are recent changes in ocean circulation in the North Atlantic, which are delivering larger amounts of subtropical waters to the high latitudes," Straneo said.

But lack of observations of the glacier prior to the quickened pace of melting make that suspicion difficult to confirm.

A WHOI and University of Maine research team conducted two extensive surveys of the Sermilik Fjord — a large glacial fjord in East Greenland — during July and September 2008.

"The subtropical waters are flowing through the fjord very quickly, so they can transport heat and drive melting at the end of the glacier," Straneo said.

The team also reconstructed seasonal temperatures on the shelf using data collected by 19 hooded seals tagged with satellite-linked temperature depth-recorders. The data revealed that the shelf waters warm from July to December, and that subtropical waters are present on the shelf year round.

"This is the first extensive survey of one of these fjords that shows us how these warm waters circulate and how vigorous the circulation is," Straneo said. "Changes in the large-scale ocean circulation of the North Atlantic are propagating to the glaciers very quickly — not in a matter of years, but a matter of months. It's a very rapid communication."

Straneo adds that the study highlights how little is known about ocean-glacier interactions, which are not currently included in climate models.

"We need more continuous observations to fully understand how they work, and to be able to better predict sea-level rise in the future," Straneo said.

The research, which will appear in the March 2010 issue of the journal Nature Geosciences, was funded by the National Science Foundation, WHOI's Ocean and Climate Change Institute Arctic Research Initiative, and NASA’s Cryosperic Sciences Program.