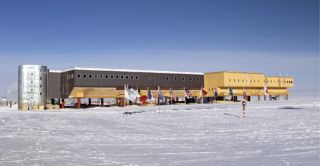 Amundsen-Scott South Pole Station, January 2006. The new elevated station nears completion. In the foreground is the ceremonial South Pole and the flags for the original 12 signatory nations to Antarctic Treaty.
(Image: © NSF/USAP)

The South Pole experienced its warmest year on record in 2009, according to newly released data from the Amundsen-Scott South Pole Station.

The average temperature at the South Pole last year was still a bone-chilling minus 54.2 degrees Fahrenheit (minus 47.9 degrees Celsius) in 2009, making it the warmest year on record since 1957, when temperature records began at the South Pole, as was reported by Peter Rejcek, an editor for The Antarctic Sun, a part of the U.S. Antarctic Program funded by the National Science Foundation.

The previous record high was minus 54.4 F (minus 48 C), recorded in 2002, according to Tim Markle, senior meteorologist at the South Pole Station in Antarctica.

Last year was also the second warmest year on record for the planet, according to NASA measurements of global surface temperatures released earlier this year.  The global record warm year, in the period of near-global instrumental measurements since the late 1800s, was 2005.

Until 2010, the South Pole has actually gone two straight winters without dipping below the minus 100 F (minus 73 C) barrier — especially worrisome for those looking to join the exclusive South Pole 300 Club (to gain admission," Polies" pile into a 200 F (93 C) sauna and then run outside in the minus 100 F cold to the geographic pole wearing their boots and little else). The mercury dropped to minus 99.9 F (minus 73.3 C) and minus 98.0 F (minus 72.2 C) in 2009. That second temperature also represents the warmest minimum temperature recorded for a calendar year, Markle told The Antarctic Sun.

In 2007, the temperature plunged below minus 100 F for only about a minute on Sept. 2, Markle added, meaning that the last three calendar years didn't significantly reach minus 100 F.

However, this April, the South Pole Station recorded an unseasonably early 22 minute dip below 100 F.

"Again, not really all that long," Markle said. "However, it was certainly the coldest temperature since Sept. 2, 2007, and a long enough duration for one group of Polies to achieve membership status into the 300 Club."