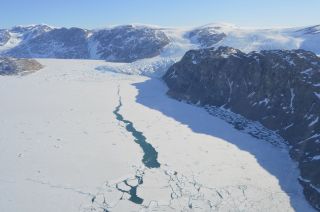 A tongue of the Greenland Ice Sheet tumbles to the sea in East Greenland near Kulusuk.
(Image: © Paul Bierman, University of Vermont)

Greenland is the biggest island on Earth and the least-densely populated country, with only around 57,000 residents. Most of the inhabited places are found along the western coast; a thick ice sheet covers the interior of the country. Scientists are growing extremely concerned that global warming is melting the ice too quickly.

Greenland sits in the North Atlantic Ocean, northeast of Canada. The island covers about 836,000 square miles (2.17 million square kilometers), or about three times the area of Texas. Only 158,000 square miles (410,000 square km) of that surface are ice-free.

One of Greenland's most prominent geographic features is its massive ice sheet, which covers more than 80 percent of the country — around 700,000 square miles (1.8 million square km). The Jakobshavn Glacier is a large valley glacier in west Greenland. It moves about 100 feet (30 meters) a day, making it one of the fastest-moving glaciers in the world, according to Smithsonian Ocean Portal. The Jakobshavn drains 6.5 percent of the Greenland ice sheet and produces about 10 percent of all the country's icebergs (about 4 billion tons of ice entering the sea). It was also the source of the iceberg that sunk the Titanic.

The remaining ice-free land consists of the island's coastal regions and is made primarily of highlands. Mountain chains run along the country's east and west coasts, with the highest point reaching 12,139 feet (3,700 m) at Gunnbjørn Mountain in the southeast.

Northern Greenland — the area north of the Arctic Circle — experiences perpetual daylight, or the midnight sun, for two months in the summer, and polar night, or perpetual darkness, in the winter. The Arctic Circle is an imaginary line that encircles the globe at 66 degrees, 34 minutes north. It marks the latitude above which the sun does not set on the summer solstice and does not rise on the winter solstice, according to the National Snow & Ice Data Center.

Greenland is one of three constituents of the Kingdom of Denmark; the other two are Denmark and the Faroe Islands. Greenland is an autonomous division of the kingdom, with limited self-government and its own parliament and prime minister.

Around 12 percent of Greenland's population is Danish, and 88 percent is Inuit, the area's indigenous people, according to The World Factbook.

About one-third of the island's population lives in Nuuk, the largest city and the capital. Around two-thirds of Greenland's budget revenue comes from Denmark, with the rest coming primarily from fishing, according to the British Broadcasting Corporation (BBC).

Greenland was first inhabited about 4,500 years ago, by people who came from what is now Canada. However, those inhabitants disappeared about 3,000 years ago for unknown reasons, according to the website Countries and Their Cultures. Another Stone Age group, called the Dorset culture, followed them. The Dorset people lasted from about 600 B.C. to A.D. 200, before disappearing.

Then, in the 10th century, the Thule culture, which had developed kayaks, dogsleds and harpoons, spread across Greenland. Anthropologists agree that Greenland's modern Inuits are descended from the Thule. The Kalaallit, indigenous Inuits who live on the island's western region, named the country Kalaallit Nunaat (land of the Kalaallit).

Also in the 10th century, Norse settlers began to inhabit the southern part of the island. Norse viking Erik Thorvaldsson (Erik the Red), exiled from Iceland for his father's crime of manslaughter, sailed west and in 982 came upon fertile valleys and a beautiful fjord landscape where he decided to settle. When he returned to Iceland four years later, he told everyone about this new land, calling it "the green land," in the hope of attracting more settlers. (Research indicates, however, that the island's climate was warmer — and the island greener — than it is today, so the name was not so far-fetched.)

In 986, Erik once again left Iceland for Greenland, this time leading 25 ships, according to Greenland Guide. There were 500 men and women on board the vessels. Of the 25 ships, only 14 reached Greenland.

The Vikings founded Brattahlid and the two small villages of Vesterbygden and Østerbygden. Around the year 1000, the population had reached around 3,000, with 300 to 400 farms, according to Greenland Guide. For around 500 years, the Vikings lived alongside the Inuit people.

Then, the Viking communities seemed to disappear in the late 15th century. What happened remains a mystery. Some people suggest the Vikings succumbed to a mini ice age or other harsh living conditions. They did leave behind many artifacts, however, providing clues to their living situations and way of life.

Europeans returned to Greenland in 1721, and Denmark claimed the island as a colony in 1775. In 1953, a new Danish constitution made Greenland a division of the Kingdom of Denmark, and in 1979, Greenland was granted status as a distinct nation within the kingdom.

Indeed, today the name Greenland is a something of a misnomer, because 80 percent of the island is covered in ice. Along the north-central coast, the climate is arctic, meaning that the summer temperatures hover around freezing (32 degrees Fahrenheit or 0 degrees Celsius), according to Climatestotravel.com.

The climate is a little milder (subarctic) toward the south. In Nuuk, the most populated city located in the south, the summers are cold, and the winters are freezing, snowy, windy and overcast, according to Weatherspark.com. The temperature in the city varies between 11 to 50 degrees F (minus 11 to 10 degrees C) and rarely goes below minus 1 degree F (minus 18 degrees C) or above 55 degrees F (12 degrees C).

Because humidity is low and Greenland is one of the best countries in the world for air quality, visibility is excellent. Even far-off mountains look much closer than they are. And since the air is so dry, it doesn't feel as cold as one might expect.

Scientists are also concerned that warmer air and thinning ice are allowing a greater number of dark algae to grow on the ice. This algae absorbs more of the sun's heat, thus accelerating the melting even more. [Related: The 'New Arctic': Thinning Ice Is Changing Ecosystem]

Greenland is home to many species of mammals and birds, including polar bears, reindeer (also called caribou), musk oxen, arctic foxes, eagles, ptarmigan, hares, lemmings and the Arctic wolf, according to VisitGreenland.com.

There are approximately 235 different species of birds in Greenland. Most of these are migratory, with around 60 species breeding on the island, according to 10000birds.com. Some of the more common types include Arctic terns, white-tailed eagles, northern fulmars, black guillemots, common eiders and rock ptarmigans.

The Arctic waters surrounding Greenland abound in whales, including the narwhal, humpback, sperm, pilot, blue, minke, beluga and fin whales. Seals are also extremely common, with a population of around 2 million. Walruses are often seen on the northern and eastern coasts. The Greenland polar bear hunts seals and birds from the sea ice year-round and sometimes comes on shore to consume vegetation in the summer. The bears usually do not hibernate during winter.

The island also holds the world's largest national park, Northeast Greenland National Park, which is around 100 times larger than Yellowstone National Park. Covering an area of 375,291 square miles (972,000 square km) with 11,184 miles (18,000 km) of coastline, the park is home to numerous Arctic species. It features unique and dramatic scenery, including the highest portions of the Northern Hemisphere's largest ice cap as well as the northernmost area of land on Earth, according to VisitGreenland.com.

Due to its relative inaccessibility, however, Northeast Greenland National Park is not a national park in the traditional sense, according to Nationalparkstraveler.org. A visit to the park requires a lot of advance planning. Very few people live in the area — mainly researchers and armed forces personnel — and only Inuit hunters have regular access to the park. Due to the high numbers of Arctic animals living here, various Inuit cultures have survived in this frigid climate for thousands of years.