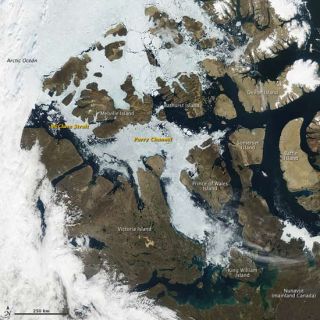 In late August 2009, ice clogged some but not all of the Northwest Passage, and snow had retreated from most of the islands in the Canadian Arctic Archipelago. The Moderate Resolution Imaging Spectroradiometer (MODIS) on NASA’s Aqua satellite caught this rare cloud-free view of the archipelago on August 27, 2009.
(Image: © NASA)

The shrinking amount of sea ice that covers the Arctic Ocean today is the smallest it has been in the last few thousand years, a new study suggests.

The sea ice that normally covers huge swaths of the Arctic Ocean has been retreating and thinning over the last few decades, due to the amplified warming at the North Pole, which is a consequence of the buildup of greenhouse gases in Earth's atmosphere.

The most dramatic sea-ice melt  in recent years came in 2007, when sea-ice extent (or the area of ocean covered by the ice) dropped to its lowest level since 1979, when satellite measurements began. This event also opened up the fabled Northwest Passage.

While satellite images are useful in looking at the changes in sea-ice extent over the last few years to decades, scientists also want to know how conditions today compare with those further back in the past. To get this information, scientists can look at sediment cores — long cylinders of the Earth's crust — drilled from the Arctic Ocean floor.

"Sediment cores are essentially a record of sediments that settled at the sea floor, layer by layer, and they record the conditions of the ocean system during the time that they settled," explained researcher Leonid Polyak of the Byrd Polar Research Center at Ohio State University in Columbus, who led a study looking at these sediment records, which are like fossils of the ocean's climate.

Characteristics of the different sediment layers — their chemical and biological components, as well as the distribution of the sediments around the ocean floor — can help scientists reconstruct when the sediment was deposited and paint a picture of the Arctic environment at that time.

For example, one biochemical marker researchers can look for is tied to a particular species of algae that lives only in ice. If that marker is found in a sediment layer, that means the location at which it was found was likely covered in ice at the time the sediment was deposited.

Polyak and his team examined data from nearly 300 past and ongoing studies of sediment cores and combined them to form a big-picture view of the climatic history of the pole stretching back millions of years. The upshot of the study: Arctic sea-ice extent is the lowest it has been for at least the last few thousand years.

"The ice loss that we see today — the ice loss that started in the early 20th century and sped up during the last 30 years — appears to be unmatched over at least the last few thousand years," Polyak said.

One thing the sediment core records can't reveal yet though is how the total volume of ice — thickness and extent — has changed in the last few thousand years. This is an important component of examining the effects of global warming on the Arctic now, as ice thickness has been declining along with ice extent in recent years.

"Underneath the surface, the ice can be thick or thin. The newest satellite techniques and field observations allow us to see that the volume of ice is shrinking much faster than its area today," Polyak said. "The picture is very troubling. We are losing ice very fast."

Polyak hopes that scientists will develop ways to look at past ice thickness amounts, but "right now, just looking at the ice extent is very difficult," he said.

During the summer of 2011, Polyak and his team hope to drill cores from beneath the Chukchi Sea, just north of the Bering Strait between Alaska and Siberia. Currents flowing in from the northern Pacific Ocean carry heat that may play an important role in melting sea ice in the area.

Polyak hopes to get cores looking back thousands of years into the Chukchi Sea climate, as well as millions of years back in cores drilled later from the more central Arctic Ocean.

The study of Arctic Ocean climate, funded by the U.S. Geological Survey and the National Science Foundation, will be detailed in an upcoming issue of the journal Quaternary Science Reviews.