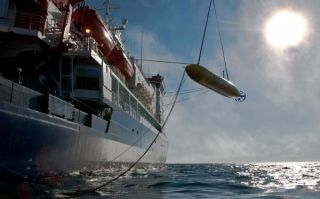 A one-of-a-kind study of marine life is under way, made possible by an autonomous, torpedo-shaped robot that recently took its first dive beneath the Arctic sea ice.

The 13-foot-long (4-meter-long) underwater vehicle, dubbed Bluefin, was deployed under heavy pack ice from a German icebreaker ship , the Polarstern, July 26. The robot spent an hour swimming through the frigid waters at a latitude of about 79 degrees north, collecting samples that will help scientists learn about life in the Arctic Ocean .

The robot, technically an Autonomous Underwater Vehicle (AUV), was deployed for the first time by the Alfred Wegener Institute for Polar and Marine Research at the Helmholtz Association in Berlin. [See the Polarstern in action ]

Michael Klages, who heads the department responsible for the Bluefin, said the mission had an "opening night" feel and that they "were happy enough that all systems and sensors worked properly."

Most of the data from the AUV are still under investigation, so scientists aren't able to say much about the results at this point, Klages told OurAmazingPlanet.

While other research groups have conducted similar under-ice missions , the combination of instruments in the Bluefin and the way the vehicle was retrieved from the sea by helicopter were firsts, Klages said.

The Polarstern, which houses nine research laboratories and has refrigerated rooms and aquaria for storing sea samples and living marine fauna, departed from Spitsbergen, a Norwegian island in the Arctic Ocean, on June 30. It returned to land at Reykjavik, Iceland, July 29.

"We are one of the world's first working groups to have successfully carried out such an under-ice mission, a goal we have been working hard to achieve," said Thomas Soltwedel, the chief scientist of the expedition. "The samples and data obtained will shed a new light on phytoplankton production in the transition area between the permanently ice-covered Arctic Ocean and its ice-free marginal zone. Autonomous underwater vehicles are opening up new possibilities to investigate the ice-covered polar seas areas that are of pivotal importance in climate research."

Unlike underwater robots that are commonly tethered to their ships , the robot deployed from the Polarstern carried out its entire mission without micromanaging scientists controlling its every move. All the information was programmed into the AUV's computer before the Bluefin was dropped into the water. The vehicle then carried out its mission independently, with no connection to the Polarstern.

The AUV was equipped with a battery of high-tech instruments for measuring marine life and water conditions, as well as for collecting samples. A light sensor captured the photosynthetically active radiation in the surface layer of the ocean. An instrument called a fluorometer continuously recorded the distribution of specific kinds of algae along the vehicle's track. A newly developed sampling system in the middle of the vehicle collected 22 water samples, each measuring 0.74 fluid ounces (220 milliliters), for later analysis.

The Polarstern is currently on its way to the northern Baffin Bay in Canada on the next leg of its expedition, its 25th to the Arctic. It is due back at its home port of Bremerhaven, Germany, Oct. 10.