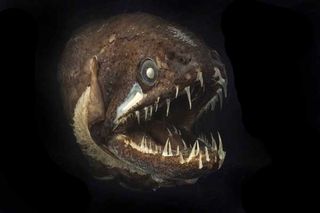 A denizen of the deep, the fierce-faced dragonfish uses its impressive arsenal of teeth to hang onto whatever rare prey crosses its path in the darkness — even its tongue has teeth!
(Image: © Dr. Julian Finn, Museum Victoria.)

The most comprehensive list ever of species that live in the planet's oceans was released Monday, near the end of a worldwide, decade-long effort to catalog the denizens of the seas.

Dr. Ron O'Dor, a Census of Marine Life senior scientist, said the exhaustive inventory-taking, which will officially conclude in early October, represents one of the largest undertakings in the history of the biological sciences. The $650 million study has involved 2,700 people in 80 countries and has already produced around 5,000 papers.

A roll call of species, published Monday as a prelude to the summary of final findings, slated for October, covers 25 key ocean habitats and regions and represents a kind of "Noah's Ark" outline of the variety of creatures found in the seas. [See some of the amazing creatures from the census.]

Researchers found that beneath the waves, crustaceans are king. From tiny krill to lobsters to crabs, these arthropods — favored snacks of humans and sea creatures alike — make up almost one-fifth of the ocean's species.

Mollusks, a group of invertebrates from squid to slugs, finished a close second, representing 17 percent of the total number of ocean species.

The census did not try to calculate the total biomass, or amount of biological material, found in the oceans.

Scientists found a wide range in biodiversity from region to region; some areas were home to a mere 2,600 different species, others to 33,000. [See some key findings of the census.]

Some species were more "cosmopolitan" than others, spending their lives on the go. Plankton and single-celled protozoa were big travelers, as were marine birds and large animals. These opposites in size spend their lives traversing the planet's oceans.

Although the study is unprecedented in scale and has provided reams of data, O'Dor said one of the most surprising findings was just how much more we have to learn.

"On average, across all these regions, experts estimated for every species on the list there are three, perhaps four they didn't have on the list," O'Dor told OurAmazingPlanet. "The magnitude of our ignorance is kind of shocking."

This may be forgiven, considering some 48 million cubic miles (200 million cubic kilometers) of ocean deep have never been sampled at all, O'Dor said. Beyond the reach of sunlight, this area begins about 650 feet (200 meters) below the waves and extends almost to the ocean floor. A place of perpetual night, it represents the largest habitat on earth — home to mysterious creatures that scientists are only beginning to understand.

Tom Webb, a marine ecologist from the University of Sheffield in England, said further exploration of the deep open ocean is essential.

"Exploring with submersibles will reveal countless new kinds of animals, many of which would not survive traditional sampling in nets," Webb said in an e-mail. And although some of the as-yet unknown creatures will be small, he said, monsters live down in the darkness, too.

"Different big squids, as well as things like megamouth sharks, and even some whales spend most of their time at those kinds of depths," he said.

O'Dor said the census was begun back in 2000 to answer the question: What lives in the ocean? One short answer might be: Not as much as formerly lived there.

By examining centuries' worth of data, researchers showed the sea's inhabitants are dwindling. The study has named three main culprits behind the disappearance, chief among them widespread overfishing, which is removing entire species from the water. Second on the list was habitat loss due to everything from urbanization of coastlines and trawling of coral reefs to pollution — O'Dor cited the Deepwater Horizon oil spill as an example. Finally, temperature change also was listed as having an impact on the ocean environment.

"Most marine species have a fairly narrow temperature preference, so global warming is going to start causing changes." O'Dor said. "Some species will be able to disperse and move to new locations and suitable habitats, but it's not really easy for a coral reef to get up and move."

O'Dor said the work provides a baseline for policy-makers around the world to better manage the oceans' — and the planet's — future. The papers appear in the open access online journal PLoS ONE.