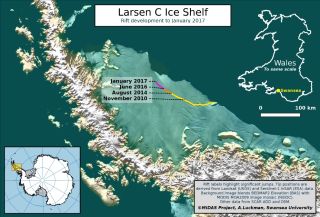 An iceberg one-fourth the size of Wales is about to break off of Antarctica.
(Image: © Copyright MIDAS Project, A. Luckman, Swansea University )

An icy thread measuring a mere 12 miles (20 kilometers) long is all that's anchoring a massive iceberg the size of Delaware to its home in West Antarctica, climate scientists report.

If the iceberg breaks away — an event known as calving — the Larsen C Ice Shelf in Antarctica will lose more than 10 percent of its area, which amounts to about 2,000 square miles (5,000 square km), according to Project MIDAS, an Antarctic research project based in the United Kingdom.

MIDAS researchers noticed the rift in 2014, and have used satellite and other data to monitor it ever since. The rift made headlines late last year when NASA's IceBridge mission snapped a photo showing the eerily immense crack, which measured 70 miles (112 km) long, more than 300 feet (91 meters) wide and about one-third of a mile (0.5 km) deep as of Nov. 10, 2016. [In Images: IceBridge Investigates Antarctica]

However, the rift has worsened since November, Project MIDAS announced yesterday (Jan. 5).

"After a few months of steady, incremental advance since the last event, the rift grew suddenly by a further 18 km [11 miles] during the second half of December 2016," MIDAS researchers wrote in a blog post. "Only a final 20 km of ice now connects an iceberg one quarter the size of Wales to its parent ice shelf."

The Larsen C Ice Shelf is the South Pole's fourth-largest ice shelf, and holds back the frozen land-based glaciers behind it, Live Science previously reported. If the iceberg breaks off, the slow-flowing glaciers will have one less barrier between them and the sea.

It's possible that Larsen C will follow in the same footsteps as Larsen B, which disintegrated in 2002 after a similar rifting event, according the Project MIDAS blog. The Larsen A Ice Shelf disintegrated in 1995.

If the Larsen C Ice Shelf does break off from Western Antarctica, it will be among the top 10 largest icebergs on record, the BBC reported. (When a chunk of ice breaks away from a glacier or an ice shelf it is called an iceberg.)

"If it doesn't go in the next few months, I'll be amazed," MIDAS project leader Adrian Luckman, a professor in the geography department at Swansea University in the United Kingdom, told BBC News.

Once it breaks off, the iceberg isn't expected to raise sea levels, Luckman said. But if the shelf continues to fall apart, then the glaciers that flow off the land might have an impact on sea levels, he told the BCC.

Estimates show that if all of the ice held back by the Larsen C Ice Shelf were to enter the sea, global oceans could rise by 4 inches (10 centimeters), the BBC reported.