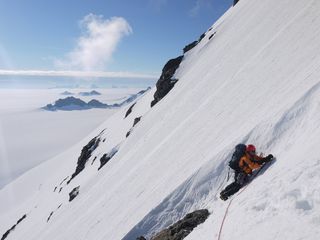 The new study comes shortly after a recent analysis found that ice melt in Greenland and Antarctica has contributed nearly a half-inch to sea-level rise since 1992. Antarctic ice sheets once thought protected from melting are also more vulnerable than expected, researchers reported in May.

Antarctica's response to climate change has always been uncertain, in part because a warming atmosphere can hold more moisture than a cooler one. More moisture is expected to bring more snow to Antarctica, which could potentially offset the melting of ice caused by warmer air and ocean water.

Now, that offset doesn't look so likely. Ricarda Winkelmann and her colleagues at the Potsdam Institute for Climate Impact Research in Germany used computer modeling to look at how the Antarctic would respond to various climate-warming scenarios. They found that greater snowfall actually enhances ice loss rather than offsetting it.

"Our simulations under future climate scenarios show that between 30 percent and 65 percent of the ice gain from enhanced snowfall are compensated by an increase of ice loss," Winkelmann told LiveScience.

The reason: When snow falls, it increases the elevation of the land or ice it falls on. In Antarctica, snow falling on the floating ice shelves weighs them down, making them sink more heavily in the water. The land doesn't have that type of elasticity, so the same amount of snowfall on the landmass of Antarctica causes 10 times the elevation change as on floating ice.

The result is a steep slope from land to ice, the natural equivalent of a Slip 'n Slide for Antarctica's ice. Ice flows faster from the continent toward the sea, resulting in sea-level rise. [Ice World: Gallery of Awe-Inspiring Glaciers]

How bad this is depends on how warm the world gets. The researchers used several scenarios based on how much extra warmth Earth will hang onto with different concentrations of carbon dioxide in the atmosphere. The least dire is an extra 2.6 Watts per square meter by 2100, while the worst scenario is an extra 8.5 Watts per square meter by that time. The researchers estimate that in a 2.6 Watts/square meter scenario, Antarctic ice will cause the equivalent of 0.26 feet (0.08 meters) in sea-level rise thanks to extra snowfall. In the worst-case scenario, the sea-level rise jumps to 1.8 feet (0.56 m).

Despite the fact that these findings hold along the entire Antarctic coast, there is still lots of uncertainty about Antarctica's future, Winkelmann said.

"We need to make further steps towards a full assessment of sea-level rise — globally and locally," she said.