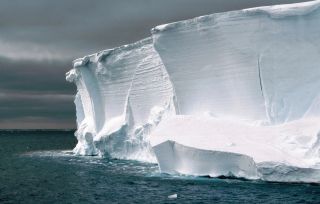 A new sector of the Antarctic Ice Sheet is at risk of melting rapidly within the next century, new research finds.

The study raises alarm about an area thought relatively safe from the direct influence of climate change. The Filchner-Ronne Ice Shelf in the Weddell Sea is somewhat sheltered from the open sea, but the new research suggests that warm ocean currents could soon invade its underbelly, melting the shelf from below.

"The Weddell Sea was not really on the screen because we all thought that, unlike the Amundsen Sea, its warm waters would not be able to reach the ice shelves," said study researcher Hartmut Hellmer. Melting is accelerating at the Amundsen embayment across the Antarctic Peninsula from the Weddell Sea.

The results of their new study, published Wednesday (May 9) in the journal Nature, surprised Hellmer, an oceanographer at the Alfred Wegener Institute in Germany, and his colleagues.

"We found a mechanism which drives warm water towards the coast with an enormous impact on the Filchner-Ronne Ice Shelf in the coming decades," Hellmer said in a statement. [In Photos: Antarctic Ice]

Hellmer and his colleagues used multiple models to determine how the ocean will respond to the atmosphere in the upcoming 200 years. They found that rising air temperatures above the southeastern Weddell Sea will thin the ice there, and warm ocean water will increasingly encroach beneath the Filchner-Ronne Ice Shelf.

By 2036, warm water currents will have reached the continental shelf, the researchers found. By about 2070, these warm waters will have drained the cavity beneath the ice shelf, and will reach the line between floating sea ice and grounded ice sitting on the seabed within 14 more years. This "grounding line" is very important: Ice that sits on terra firma is thicker than floating ice, and melting of this ice would discharge more liquid water into the sea.

By the end of the 21st century, the researchers found, the melting of the Filchner-Ronne Ice Shelf will go from today's average rate of 0.7 feet (0.2 meters) of ice loss per year to 13 feet (4 m) per year. In some spots, as much as 164 feet (50 m) of ice will be lost each year. At a rate of 4 meters of ice loss per year, the ice sheet will shed 1,600 billion metric tons of ice annually.

A second study, published this week in the journal Nature Geoscience, finds that the seabed under the Filchner-Ronne Ice Sheet is steeply sloped and smooth, meaning there will be few topographical barriers to the accelerated melting.

Now researchers are working to better understand how the ice streams that feed the ice sheet will respond to the melting. The ice shelves act like corks in a wine bottle, keeping the flow of ice behind them from reaching the sea, Hellmer said. According to study researcher Jürgen Determann, who like Hellmer is from the Alfred Wegener Institute for Polar and Marine Research, if the inland ice moves in lockstep with the ice sheet melting, it will mean an additional global sea level rise of 0.17 inches (4.4 millimeters) per year.