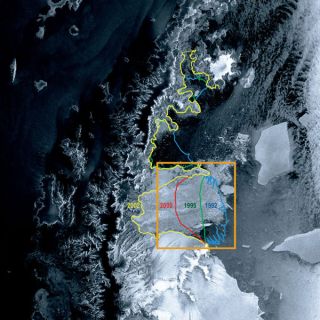 This image of the Larsen Ice Shelf B was taken in 2002 by the satellite Envisat. Earlier levels extents are marked. Since Envisat was launched in 2002, the ice shelf has declined further.
(Image: © ESA)

As a European satellite enters its second decade in orbit, it continues to observe the retreat of an Antarctic ice sheet, which has been dwindling due to warming.

The satellite, Envisat, was launched by the European Space Agency (ESA) on March 1, 2002. One of its first observations was the disintegration of 1,235 square miles (3,200 square kilometers) of ice from part of the Larsen Ice Shelf. (Ice shelves are "permanent" floating sheets of ice connected to a land mass, with most of the world's ice shelves hugging the coast of Antarctica.)

The Larsen Ice Shelf encompasses shelves: A (the smallest), B and C (the largest), which line the eastern side of the Antarctic Peninsula. The peninsula is one of the fastest-warming places on Earth, jutting north of the rest of the frozen continent.

Over its decade in orbit, Envisat has watched the B shelf dwindle by an additional 691 square miles (1,790 square km), due to calving events whereby large chunks of ice break off from the main shelf. For instance, a chunk twice the size of the city of Dallas broke off of Larsen B in January 2005. This shelf is now less than 15 percent of its size in 1995.

While Larsen A disintegrated in January 1995, Larsen C has been stable, though observations show it is thinning and that its summer melts are becoming longer.

"Ice shelves are sensitive to atmospheric warming and to changes in ocean currents and temperatures," said Helmut Rott, a professor from the University of Innsbruck in Austria, in a statement. "The northern Antarctic Peninsula has been subject to atmospheric warming of about 2.5 degrees Celsius (4.5 degrees Fahrenheit) over the last 50 years —a much stronger warming trend than on global average, causing retreat and disintegration of ice shelves."

Envisat is scheduled to continue its radar observations for at least another two years, until the next generation of satellites, called the Sentinels, go online in 2013, according to the ESA. [In Images: Tracking a Retreating Glacier]