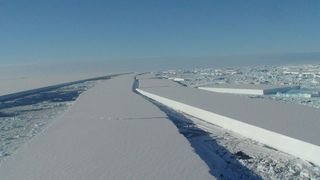 The frozen desert interior of Antarctica was thought to be the lone holdout resisting the man-made warming affecting the rest of the globe, with some areas even showing signs of cooling.

Some global warming contrarians liked to point to inner Antarctica as a counter-example. But climate researchers have now turned this notion on its head, with the first study to show that the entire continent is warming, and has been for the past 50 years.

"Antarctica is warming, and it's warming at the same rate as the rest of the planet," said study co-author Michael Mann of Penn State University.

This finding, detailed in the Jan. 21 issue of the journal Nature, has implications for estimating ice melt and sea level rise from the continent, which is almost entirely covered by ice that averages about a mile (1.6 kilometers) thick. The revelation also undermines the common use of Antarctica as an argument against global warming by contrarians, Mann said.

Not all of Antarctica was thought to be immune to rising global temperatures, of course. Scientists have been watching as the Antarctic Peninsula, the only part of the continent that juts outside the Antarctic Circle, has warmed faster than the global average, and entire ice shelves have collapsed into the south polar ocean.

In stark contrast, a large part of the continent — the East Antarctic Ice Sheet — was found to be getting colder. The cooling was linked to another anthropogenic (human-caused) effect: ozone depletion.

Ozone in the Earth's stratosphere absorbs the sun's incoming ultraviolet rays, protecting living things on the surface (including humans) from detrimental effects. Certain types of manmade chemicals have depleted much of this protective layer over the last few decades.

As ozone was depleted, less radiation was absorbed at this layer of the atmosphere, which altered the layering of temperatures over Antarctica, over which the largest ozone "hole" is found (it's not really a hole, but rather a region of extreme thinning). This in turn altered wind patterns and strengthened the circumpolar vortex, creating a wall of winds that isolated the cold air over Antarctica from the warm air over the South Pacific Ocean, Mann explained.

Essentially, the effect of ozone depletion was "overwhelming the influence of greenhouse warming," Mann told LiveScience. He and his colleagues were able to show this in their study by compiling a more comprehensive temperature profile of Antarctica than scientists have ever had.

Weather stations have been in place in Antarctica since 1957, but almost all of them are near the coast, providing no information about conditions in the continent's interior.

Satellites are available now that calculate the surface temperature of the interior based on how much infrared light is radiated by the snowpack, but these records only go back 25 years.

The key to the study was comparing the two records and finding that they matched up closely for overlapping time periods. The researchers then developed a statistical technique that used the data from both sources to make a new estimate of Antarctic temperature trends.

"People were calculating with their heads instead of actually doing the math," said lead author of the study Eric Steig, of the University of Washington in Seattle. "What we did is interpolate carefully instead of just using the back of an envelope."

Their work showed that not only was the Antarctic Peninsula warming, but the interior of West Antarctica — the ice sheet most susceptible to potential future collapse — was as well. And not only that, but that "the continent on the whole is warming," Mann said. "This is the first study to demonstrate that."

The study, funded by the National Science Foundation, found that warming in West Antarctica exceeded about 0.18 degree Fahrenheit (0.1 degree Celsius) per decade for the last 50 years — more than enough to offset the cooling in East Antarctica.

And with ozone depletion having leveled off, that cooling is unlikely to continue in the future.

"Efforts to repair the ozone layer eventually will begin taking effect and the hole could be eliminated by the middle of this century. If that happens, all of Antarctica could begin warming on a par with the rest of the world," Steig said.

The study is "good work," said Kevin Trenberth of the National Center for Atmospheric Research (NCAR) in Boulder, Colo., but he says there are unique aspects of Antarctica's climate that haven't been taken into account. Trenberth was not involved in the Nature study.

One problem is that temperature inversions can bring warmer air down influencing surface temperatures. "This aspect has not been addressed to date," Trenberth told LiveScience.

The authors dispute this comment: "There is no evidence to support Trenberth's speculation, and there is much evidence that he is wrong," Steig told LiveScience.

Steig explained that they saw the same results whether they used satellite temperatures or those from the weather stations that sit a few meters above the surface, which wouldnt' be the case if inversions were an important factor.

Andrew Monaghan, also of NCAR, said that he agreed with the broad findings of the study, which line up with similar studies he has done of Antarctic temperature trends. He told LiveScience that the biggest finding of the study was the warming of West Antarctica, which is part of the broad ice sheet contributing to ice melt — "it's a Greenland-sized chunk of Antarctica," he said.

Monaghan, who was also not part of the Nature study, said that it is harder to generalize to the continent as a whole and that Antarctica has a highly variable natural climate and that "we still don't understand the natural component well at all."

The implications of the findings for the stability of the Antarctic's ice sheets aren't entirely clear yet and will have to be evaluated by ice sheet modelers, Mann said.

The worry isn't so much from East Antarctica, which sits at a higher elevation than the rest of the continent and is so cold (many degrees below freezing) that the few tenths of a degree of warming isn't yet an issue.

But the study likely means that "a larger part of West Antarctica is melting" than previously thought, Mann said.

West Antarctica is more subject to warm, moist storms and because its ice is all landlocked, it could contribute to sea level rise if it melts. (Ice that's floating on the sea does not raise the sea level if it melts.)

Modelers won't be the only ones interested in the study's findings, as other scientists will likely seek ways to independently and directly confirm or refute the data. Mann mentioned one such study that has been submitted to a journal that used holes in the ice to see how temperatures have changed in the past and has confirmed the underlying warming in East Antarctica.

Outside of these impacts, the study also take away "one of the standard talking points of [global warming] contrarians," Mann said. The argument used by skeptics was "how can the globe be warming if a whole continent is cooling," Mann explained.

Mann said that this argument was "disingenuous" to begin with because the cooling caused by ozone depletion was reproduced by climate models, but the new study soundly routs contrarian claims, he said.

Mann is one of the scientists behind the blog RealClimate.org, which aims to explain the science behind climate change. Steig is contributing a post there on the new study to explain the findings.