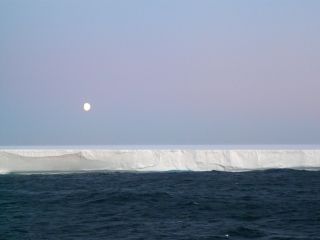 The moon over an iceberg in the Weddell sea of Antarctica.
(Image: © Diane Chakos/Scripps Institution of Oceanography, UC San Diego.)

Rising temperatures in the Pacific may be directly contributing to ongoing warming in Antarctica, a new study finds.

Heat rising from warm Pacific waters near the equator causes waves of warmth in the atmosphere — a phenomenon called the Rossby wave train, researchers report today (April 10) in the journal Nature Geoscience. The wave train brings warmer temperatures to West Antarctica during the winter and spring.

The Antarctic Peninsula has been warming rapidly for at least a half-century, and continental West Antarctica has been getting steadily hotter for 30 years or more. The findings also could have implications for understanding the causes behind the thinning of the West Antarctic Ice Sheet, which contains about 10 percent of all the ice in Antarctica. [In Photos: Antarctic Ice]

They found a strong relationship during the winter months, June through August in Antarctica. A smaller effect also appeared in the spring months of September through November.

The observed circulation changes are in the form of a series of high- and low-pressure cells that follow an arcing path in the air from the tropical Pacific to West Antarctica. That is characteristic of a textbook Rossby wave train pattern, study researcher Qinghua Ding, a postdoctoral researcher at the University of Washington, said in a statement. The same pattern is consistently produced in climate models, at least during winter.

Using observed changes in tropical sea surface temperatures, the researchers found they could account for half to all of the observed winter temperature changes in West Antarctica, depending on which observations are used for comparison.

"This is distinct from El Niño," Steig said in a statement. That climate phenomenon, which affects weather patterns worldwide, primarily influences sea-surface temperatures farther east in the Pacific, nearer to South America. It can be — but isn't always — associated with strong warming in the central Pacific.

The atmospheric waves may also be partly to blame for the melting West Antarctic Ice Sheet. Westerly winds created by high pressure over the Amundsen Sea push cold water away from the ice sheet and toward the open ocean, Steig said. It is then replaced by warmer water from deeper in the ocean, which melts the ice sheet from below.