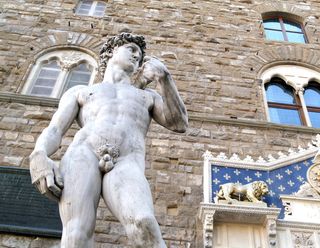 The Renaissance typically refers to a period in European history approximately between 1400 and 1600. Many historians assert that it started earlier or ended later, depending on the country. It bridged the periods of the Middle Ages and modern history, and, depending on the country, overlaps with the Early Modern, Elizabethan and Restoration periods. The Renaissance is most closely associated with Italy, where it began in the 14thcentury, though countries such as Germany, England and France went through many of the same cultural changes and phenomena.

"Renaissance" comes from the French word for "rebirth." According to the City University of New York at Brooklyn, intense interest in and learning about classical antiquity was "reborn" after the Middle Ages, in which classical philosophy was largely ignored or forgotten. Renaissance thinkers considered the Middle Ages to have been a period of cultural decline. They sought to revitalize their culture through re-emphasizing classical texts and philosophies. They expanded and interpreted them, creating their own style of art, philosophy and scientific inquiry. Some major developments of the Renaissance include astronomy, humanist philosophy, the printing press, vernacular language in writing, painting and sculpture technique, world exploration and, in the late Renaissance, Shakespeare's works.

The term Renaissance was not commonly used to refer to the period until the 19thcentury, when Swiss historian Jacob Burckhardt popularized it in his classic, "The Civilization of Renaissance Italy."

Contrary to popular belief, classical texts and knowledge never completely vanished from Europe during the Middle Ages. Charles Homer Haskins wrote in "The Renaissance of the Twelfth Century" that there were three main periods that saw resurgences in the art and philosophy of antiquity: the Carolingian Renaissance, which occurred during the reign of Charlemagne, the first emperor of the Holy Roman Empire (eighth and ninth centuries), the Ottonian Renaissance, which developed during the reigns of emperors Otto I, Otto II and Otto III (10thcentury) and the 12thCentury Renaissance.

The 12thCentury Renaissance was especially influential on the later Renaissance, said Wilde. Classical Latin texts and Greek science and philosophy began to be revived on a larger scale, and early versions of universities were established.

The Crusades played a role in ushering in the Renaissance, Philip Van Ness Myers wrote in "Medieval and Modern History." While crusading, Europeans encountered advanced Middle Eastern civilizations, which had made strides in many cultural fields. Islamic countries kept many classical Greek and Roman texts that had been lost in Europe, and they were reintroduced through returning crusaders.

The fall of the Byzantine and Roman Empires at the hands of the Ottomans also played a role. "When the Ottomans sacked Constantinople in 1453, many scholars fled to Europe, bringing classical texts with them," said Susan Abernethy, a Colorado-based historian and writer. "Conflict in Spain between the Moors and Christians also caused many academics to escape to other areas, particularly the Italian city-states of Florence, Padua and others. This created an atmosphere for a revival in learning."

The Black Death helped set the stage for the Renaissance, wrote Robert S. Gottfried in "The Black Death." Deaths of many prominent officials caused social and political upheaval in Florence, where the Renaissance is considered to have begun. The Medici family moved to Florence in the wake of the plague. They, and many others, took advantage of opportunities for greater social mobility. Becoming patrons of artists was a popular way for such newly powerful families to demonstrate their wealth. Some historians also argue that the Black Death caused people to question the church's emphasis on the afterlife and focus more on the present moment, which is an element of the Renaissance's humanist philosophy.

Many historians consider Florence to be the Renaissance's birthplace, though others widen that designation to all of Italy. From Italy, Renaissance thought, values and artistic technique spread throughout Europe, according to Van Ness Myers. Military invasions in Italy helped spread ideas, while the end of the Hundred Years War between France and England allowed people to focus on things besides conflict.

Characteristics of the Renaissance

"The demand for perfect reproductions of texts and the renewed focus on studying them helped trigger one of the biggest discoveries in the whole of human history: printing with movable type. For me this is the easiest and single greatest developed of the Renaissance and allowed modern culture to develop," Wilde told Live Science. The printing press was developed in Europe by Johannes Gutenberg in 1440. It allowed Bibles, secular books, printed music and more to be made in larger amounts and reach more people. [Related: How Gutenberg Changed the World]

Wilde said one of the most significant changes that occurred during the Renaissance was the "evolution of Renaissance humanism as a method of thinking … This new outlook underpinned so much of the world then and now."

Wilde described Renaissance humanism as "attempts by man to master nature rather than develop religious piety." Renaissance humanism looked to classical Greek and Roman texts to change contemporary thought, allowing for a new mindset after the Middle Ages. Renaissance readers understood these classical texts as focusing on human decisions, actions and creations, rather than unquestioningly following the rules set forth by the Catholic Church as "God's plan." Though many Renaissance humanists remained religious, they believed God gave humans opportunities and it was humanity's duty to do the best and most moral thing. Renaissance humanism was an "ethical theory and practice that emphasized reason, scientific inquiry and human fulfillment in the natural world," said Abernethy.

Renaissance art was heavily influenced by classical art, wrote Virginia Cox in "A Short History of the Italian Renaissance." Artists turned to Greek and Roman sculpture, painting and decorative arts for inspiration and also because their techniques meshed with Renaissance humanist philosophy. Both classical and Renaissance art focused on human beauty and nature. People, even when in religious works, were depicted living life and showing emotion. Perspective and light and shadow techniques improved and paintings looked more three-dimensional and realistic.

Patrons made it possible for successful Renaissance artists to work and develop new techniques. The Catholic Church commissioned most artwork during the Middle Ages, and while it continued to do so during the Renaissance, wealthy individuals also became important patrons, according to Cox. The most famous patrons were the Medici family in Florence, who supported the arts for much of the 15thand 16thcenturies. The Medici family supported artists such as Michelangelo, Botticelli, Leonardo da Vinci and Raphael.

Florence was the initial epicenter of Renaissance art but by the end of the 15thcentury, Rome had overtaken it. Pope Leo X (a Medici) ambitiously filled the city with religious buildings and art. This period, from the 1490s to the 1520s, is known as the High Renaissance.

As with art, musical innovations in the Renaissance were partly made possible because patronage expanded beyond the Catholic Church. According to the Metropolitan Museum of Art, new technologies resulted in the invention of several new instruments, including the harpsichord and violin family. The printing press meant that sheet music could be more widely disseminated.

Renaissance music was characterized by its humanist traits. Composers read classical treatises on music and aimed to create music that would touch listeners emotionally. They began to incorporate lyrics more dramatically into compositions and considered music and poetry to be closely related, according to the Metropolitan Museum of Art.

Renaissance literature, too, was characterized by humanist themes and a return to classical ideals of tragedy and comedy, according to theBrooklyn College English Department. Shakespeare's works, especially "Hamlet," are good examples of this. Themes like human agency, life's non-religious meanings and the true nature of man are embraced, and Hamlet is an educated Renaissance man.

The most prevalent societal change during the Renaissance was the fall of feudalism and the rise of a capitalist market economy, said Abernethy. Increased trade and the labor shortage caused by the Black Death gave rise to something of a middle class. Workers could demand wages and good living conditions, and so serfdom ended.

"Rulers began to realize they could maintain their power without the church. There were no more knights in service to the king and peasants in service to the lord of the manor," said Abernethy. Having money became more important than your allegiances.

Due to a number of factors — including the Black Death, the rise in trade, the development of a middle class and the papacy's temporary move from Rome to Avignon (1309-1377) — the Catholic Church's influence was waning as the 15thcentury began. The re-emergence of classical texts and the rise in Renaissance humanism changed society's approach to religion and the authority of the papacy, said Abernethy. "[Humanism] created an atmosphere that gave rise to different movements and sects … Martin Luther stressed reform of the Catholic Church, wanting to eliminate practices such as nepotism and the selling of indulgences," Abernethy said.

"Perhaps most important, the invention of the printing press allowed for the dissemination of the Bible in languages other than Latin," Abernethy continued. "Ordinary people were now able to read and learn the lessons of Scripture, leading to the Evangelical movement." These early Evangelicals emphasized the importance of the Scriptures rather than the institutional power of the church and believed that salvation was personal conversion rather than indulgences or works.

Thirsty to learn more about the world and eager to improve trade routes, explorers sailed off to chart new lands. Columbus "discovered" the New World in 1492 and Ferdinand Magellan became the first person to successfully circumnavigate the globe in the early 1500s.

As scholars studied classical texts, they "resurrected the Ancient Greek belief that creation was constructed around perfect laws and reasoning," Abernethy said. "There was an escalation in the study of astronomy, anatomy and medicine, geography, alchemy, mathematics and architecture as the ancients studied them."

One of the major scientific discoveries of the Renaissance came from Polish mathematician and astronomer Nicolaus Copernicus. In the 1530s, he published his theory of a heliocentric solar system. This places the sun at the center of the solar system rather than the Earth. It was a major breakthrough in the history of science, though Copernicus' book was banned by the Catholic Church.

Empiricism began to take hold of scientific thought. "Scientists were guided by experience and experiment and began to investigate the natural world through observation," said Abernethy. "This was the first indication of a divergence between science and religion.

They were being recognized as two separate fields, creating conflict between the scientists and the church and causing scientists to be persecuted," continued Abernethy. "Scientists found their work was suppressed or they were demonized as charlatans and accused of dabbling in witchcraft, and sometimes being imprisoned."

Galileo Galilei was a major Renaissance scientist persecuted for his scientific experiments. Galileo improved the telescope, discovered new celestial bodies and found support for a heliocentric solar system. He conducted motion experiments on pendulums and falling objects that paved the way for Newton's discoveries about gravity. The Catholic Church forced him to spend the last nine years of his life under house arrest.

How the Renaissance changed the world

"The Renaissance was a time of transition from the ancient world to the modern and provided the foundation for the birth of the Age of Enlightenment," said Abernethy. The developments in science, art, philosophy and trade, as well as technological advancements like the printing press, left lasting impressions on society and set the stage for many elements of our modern culture.