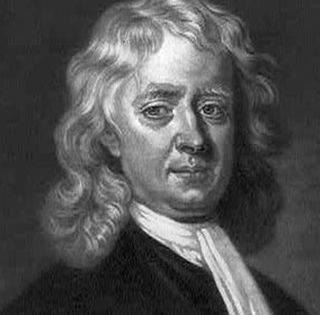 Isaac Netwon is synonymous with apples and gravity. He rose to become the most influential scientist of the 17th century, his ideas becoming the foundation of modern physics, after very humble beginnings. But first, the big question: Did an apple really fall on Newton's head and spur him to figure out gravity? Historians say there is likely no more than a grain of truth to the story.

Sir Isaac Newton was born, premature and tiny, in 1642 in Woolsthorpe, England. His father, wealthy but uneducated, died before Newton was born, and he ended up being raised by his grandmother after his mother remarried. It’s said he didn’t excel at school, but he ended up studying law at Trinity College Cambridge, part of Cambridge University. He worked as a servant to pay his bills. And he kept a journal about his ideas.

What got Newton interested in math? He bought a book on the subject and couldn't comprehend it. After getting his bachelor's degree in 1665; he studied math, physics, optics and astronomy on his own (Cambridge was closed for a couple of years due to the plague known as the Black Death). By 1666 he had completed his early work on his three laws of motion. Later he got his master's degree.

Later work focused on the diffraction of light (he used a prism to discover that white light is made of a spectrum of colors) and the concepts he'd become known for: universal gravitation, centrifugal force, centripetal force, and the effects and characteristics of bodies in motion. His laws are still used by physics students today:

Newton said many things worth remembering, including these philosophical gems:

Newton once said that if he had achieved anything in his research, it was "by standing on the shoulders of giants." The quote was prophetic. A couple of centuries later, Albert Einstein puzzled over how to reconcile Newton's law of gravity with special relativity, which after several years led to Einstein's theory of general relativity.

While he's best known for his work on gravity, Newton was a tinkerer, too, but more with ideas than physical inventions. He did invent reflecting lenses for telescopes, which produced clearer images in a smaller telescope compared with the refracting models of the time. In his later years, he developed anti-counterfeiting measures for coins, including the ridges you see on quarters today.

Among his biggest "inventions" was calculus. Yes, that's right. Mere math and algebra weren't enough to explain the ideas in his head, so he helped invent calculus (German mathematician Gottfried Leibniz is typically credited with developing it independently at about the same time).

It's said that Newton invented a cat door so his cats would stop scratching to get in, but the truth of that one is a bit sketchy.

He also conceived of an "orbital cannon" that would poke out of a huge mountain, up in space, and with just the right amount of gunpowder could put a cannonball into orbit. This was not something Newton actually imagined building, but rather a way to think about his theories.

Urged by astronomer Edmond Halley (who was studying his now-famous comet), Newton continued to study his notion of gravity and apply it to the motions of the Earth, sun and moon. It all led to his seminal work, published in 1687, called the "Principia" — considered by many as the greatest science book ever written.

Newton's research stopped in 1679 when he had a nervous breakdown. Later, recovered, he spoke out against King James II, who wanted only Roman Catholics to be in powerful government and academic positions. When James was later driven out of England, Newton was elected to Parliament. He had a second breakdown in 1693, then retired from research. Isaac Newton died in 1727.

Among his more eccentric pastimes, Newton also dabbled (or more than dabbled) in alchemy, also called chymistry, with some historians estimating that he wrote more than a million words of alchemical notes, according to curator of rare books at the Chemical Heritage Foundation, James Voelkel.

And in March 2016, researchers announced they had found bought a 17th-century alchemy manuscript written by Newton. The manuscript, which had been hidden in a private collection for decades and turned up at an auction at Bonhams, provided the recipe for "philosophic" mercury, which was considered a step in the process for concocting a mysterious substance known the philosopher's stone; this material was thought to have supernatural powers — the ability to turn any metal into gold and to grant immortality. The manuscript will be available online for enthusiasts to explore.