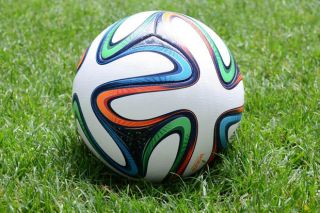 A body, such as a soccer ball, will remain at rest unless acted upon by an external force.
(Image: © Vasanth C. Shunmugasamy, Post-Doctoral Research Associate)

Isaac Newton's First Law of Motion describes the behavior of a massive body at rest or in uniform linear motion, i.e., not accelerating or rotating. The First Law states, "A body at rest will remain at rest, and a body in motion will remain in motion unless it is acted upon by an external force."

This simply means that things cannot start, stop or change direction all by themselves. It requires some force acting on them from the outside to cause such a change. While this concept seems simple and obvious to us today, in Newton's time it was truly revolutionary.

Newton published his laws of motion in 1687, in his seminal work "Philosophiæ Naturalis Principia Mathematica" (Mathematical Principles of Natural Philosophy) in which he formalized the description of how massive bodies move under the influence of external forces.

Newton expanded upon the earlier work of Galileo Galilei, who developed the first accurate laws of motion for masses, according to Greg Bothun, a physics professor at the University of Oregon. Galileo's experiments showed that all bodies accelerate at the same rate regardless of size or mass. Newton also critiqued and expanded on the work of Rene Descartes, who also published a set of laws of nature in 1644, two years after Newton was born. Descartes' laws are very similar to Newton's first law of motion.

Back then, most people believed that the natural state of a body was to be at rest. It was obvious that imparting motion to a body at rest required the application of an outside force. However, it was also believed that it required a continuous outside force to keep a body in motion. Based on their experience with everyday objects, this was not an entirely unreasonable conclusion. After all, if your horse stopped pulling, your wagon would stop rolling, and if the wind stopped blowing, your boat would stop moving. People therefore assumed that these objects were simply reverting to their natural rest state. It took a remarkable leap of intuition to realize that there had to be an outside force acting to stop the motions of these objects.

Take the case of a flat stone sliding on the smooth surface of a frozen lake. If that stone were a piece of polished marble, it would slide considerably farther than a rough paving stone. It is apparent that the force of friction is greater on the rough paving stone than on the polished marble. However, while the frictional force between the marble and the ice is less than that between the rough stone and the ice, it is still not zero.

What would happen, then, if the frictional force were to go to zero? Newton's stroke of genius in this case was to realize that without the presence of an outside force such as friction acting on a body in motion, there was no reason for it to stop.

When we say that a body is in motion, one might ask, in motion compared to what? Could you catch a baseball going 100 mph in your bare hand? You could if you were riding on a train going 100 mph, and someone on that train gently tossed you the ball. The train and the track both exist in their own inertial reference frames, and the speed of the ball depends on the inertial reference frame from which it is viewed. If you were standing on the platform, and a passenger on that train tossed the ball out the window to you, it would not be wise to attempt to catch it in your bare hand.

Rockets traveling through space encompass all three of Newton's laws of motion.

Before a rocket is even launched, it is at rest on the surface of Earth. It would stay at rest indefinitely without any external force acting upon it. Newton's first law also applies when the rocket is gliding through space with no external forces on it, it will travel in a straight line at a constant speed forever.

Now that we know how an object behaves when there is no outside force acting upon it, what happens when there is an outside force, such as the engines firing up in order to launch the rocket into space? That situation is described by Newton’s Second Law of Motion.