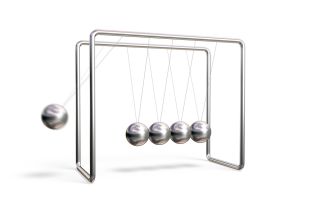 Classical mechanics accurately describes the behavior of most "normal" objects. According to "The Dynamic Chemistry E-textbook" from the University of California, Davis Department of Chemistry, to be considered "normal," objects should be "larger than a molecule and smaller than a planet," close to room temperature and going at speeds significantly slower than the speed of light.

Old science with a new name

The equations developed prior to 1900 were still perfectly suitable for describing objects of everyday sizes and speeds. However, because this older branch of physics existed alongside two new ones, it needed a new name. The term "classical mechanics" was coined to loosely label the set of equations that describe reality at scales where quantum and relativistic effects are negligible.

In 1687, Newton published "Philosophiæ Naturalis Principia Mathematica" (Mathematical Principles of Natural Philosophy) which described how bodies move under the influence of external forces. This work unified mathematical reasoning with relatively new ideas about motion here on the Earth's surface, and the most ancient of all fields of scientific inquiry: astronomy.

The ancient civilizations of Mesopotamia, Egypt and the Indus Valley all demonstrated an understanding of the motion of the sun, moon and stars; they could even predict the dates of eclipses by the 18th century B.C. As E.C. Krupp described in his book "Echoes of the Ancient Skies" (Dover, 2003), "The stars and planets were often a target of worship, believed to represent their gods." Such supernatural explanations by definition lacked evidence, but the records of observation laid the foundation for generations of observers. Celestial mechanics thusly became the study of how things move about the heavens.

The ancient Greeks were the first to consistently seek natural (as opposed to supernatural) explanations. As Charles Singer wrote in his book "A Short History of Science to the Nineteenth Century" (Dover, 2011), "Philosophers like Thales (624-545 B.C.) rejected non-naturalistic explanations for natural phenomena and proclaimed that every event had a natural cause." The myriad explanations involving, for example, "bodily humors" and "cosmic shells surrounding Earth," were indeed naturalistic, but most were fantastically wrong. A particularly tenacious set of wrong ideas centered on motion, which for nearly 2000 years built on the work of Aristotle (384-322 B.C.). This work, dubbed "the theory of impetus," would undergo major revisions in the sixth, 12th and 14th centuries A.D. Terrestrial mechanics thusly became the study of how things move and interact on the Earth's surface.

By the 16th century, scholars began to notice that the theory of impetus was ill suited for describing many phenomena — in particular, projectiles flung from catapults and cannons. According to the theory, a projectile should fly through the air until it runs out of impetus, whereupon it should fall straight to the ground. In reality, the path of a projectile is a very specific curve. To make sense of these observations, according to Bernard Cohen in "The Birth of a New Physics" (Norton, 1985), scientists began to think about gravity pulling on objects with uniform acceleration. In his 1638 publication, "Dialogues Concerning Two New Sciences," Galileo Galilei (1564-1642) published the first mathematical proof that uniform acceleration would cause projectiles to move in parabolic trajectories that matched observations, thus showing that terrestrial mechanics are governed by mathematics.

Similarly, and also in the 16th century, celestial mechanics was shown to have extremely strong ties to mathematics. According to David S. Landes in "Revolution in Time" (Belknap, 1983), Tycho Brahe (1546-1601) was one of the first astronomers to use clocks capable of counting minutes and seconds, along with quadrants and sextants, to track the movements of celestial objects (the telescope had not yet been adapted from the naval spyglass). Johannes Kepler (1571-1630) based his three laws of planetary motion, on Brahe's data for the motion of Mars. The first of these laws, published in his 1609 work, "Astronomia Nova," showed that planets move in elliptical paths around the sun.

Seventy years later, Newton built on the work of Galileo and Kepler to show that the elliptical movements of the celestial realm and parabolic movements of the terrestrial realm could be explained by one elegant mathematical law, his Law of Universal Gravitation. In addition, he formalized the laws of motion by describing them in the language of mathematics.

Using Newton's laws, scientists could manipulate symbolic math with algebra and calculus (also co-invented by Newton) to learn about phenomena not yet observed. Classical mechanics grew throughout the 18th and 19th centuries to describe everything from optics, fluids and heat to pressure, electricity and magnetism.

Robert Coolman is a graduate researcher at the University of Wisconsin-Madison, finishing up his Ph.D. in chemical engineering. He writes about math, science and how they interact with history. Follow Robert @PrimeViridian. Follow us @LiveScience, Facebook & Google+.