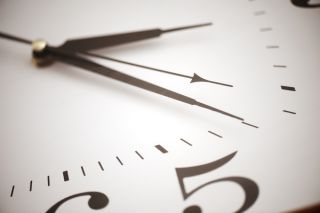 How did we come to divide the hour into 60 minutes and the minute into 60 seconds? These smaller divisions of time have been in practical use for only about 400 years, but they were vital to the advent of modern science.

Dividing the day was not so straightforward, though hours and minutes have their origins in traditions tracing back thousands of years.

The use of 60 began with the Sumerians who used different number systems. While you and I write numbers using base 10, or “decimal” this civilization used base 12 ("duodecimal") and base 60 ("sexigesimal"). It is not known exactly why they chose these systems, but there are a few theories:

In the 24th century B.C., the Sumerians were conquered by the Akkadians, who then fell to the Amorites, who rose to power and built the nation-state of Babylon, which peaked in the 18th century B.C. The Babylonians invented the degree and defined a circle as having 360 degrees. There are a couple of theories as to why they chose 360:

Off to Greece and Rome

The conquests of Alexander the Great between 335 and 324 B.C. helped spread Babylonian astronomy to Greece and India. Though the Greeks had their own numerals in base 10, Babylonian star catalogs created such a strong association between astronomy and the sexigesimal system that Greek (and later Roman) scholars kept using it. This association soon bled into navigation and trigonometry.

Following the discovery by Eratosthenes of Cyrene that the Earth is round, in the first century B.C., Hipparchus of Nicaea adapted degrees to quantify lines of longitude and latitude. Two centuries later in the Roman Empire, Ptolemy of Alexandria subdivided degree coordinates into 60ths (minutes) and 60ths of 60ths (seconds). This convention of “degrees, minutes and seconds” is still used today to plot locations on Earth as well as the positions of stars.

To Arabia, Iberia and Greater Europe

Much of this knowledge was lost to Europe for several centuries after the fall of Rome in the fifth century A.D. The Islamic-Arabian empires inherited many Roman (and later Indian) ideas starting with the Rashidun Caliphate in the seventh century. Muslims scholars, after expanding on this knowledge greatly, reintroduced it to Europe in the eighth century through the Iberian Peninsula, which was then part of the Umayyad Caliphate.

Time to find out if you've been paying attention! Prove it by taking the time to take this quiz:

Minutes and seconds, however, were not used for everyday timekeeping for several centuries. Mechanical clocks first appeared in Europe during the late 14th century, but with only one hand, following the design of sundials and water clocks. Minutes and seconds were but hypothetical quantities of time. According to David S. Landes, in “Revolution in Time” (Belknap, 1983), astronomers of the 16th century began physically realizing minutes and seconds with the construction of improved clocks with minute and second hands in order to improve measurements of the sky. While sextants and quadrants (no telescopes yet) had long been used to quantify the heavens, due to the movements of the sky their accuracy was limited to how well a user knew the time.

Tycho Brahe was one such pioneer of using minutes and seconds, and was able to make measurements of unprecedented accuracy. Many of his measurements required him to know the time to within 8 seconds. In 1609, Johannes Kepler published his laws of planetary motion based on Brahe’s data. Seventy years later, Isaac Newton used these laws to develop his theory of gravitation; showing that terrestrial and celestial motions were governed by the same mathematical laws.

Today, 5,000 years after the Sumerians first began using 60, we divide our days by hours, minutes and seconds. In recent years, we have changed how the units are measured. No longer derived by dividing astronomical events into smaller parts, the second is now defined on the atomic level. Specifically, a second is the duration of 9,192,631,770 energy transitions of the cesium atom.