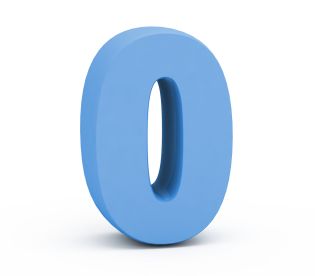 The concept of zero, both as a placeholder and as a symbol for nothing, is a relatively recent development.
(Image: © Iraidka | Shutterstock)

Though people have always understood the concept of nothing or having nothing, the concept of zero is relatively new; it fully developed in India around the fifth century A.D., perhaps a couple of centuries earlier. Before then, mathematicians struggled to perform the simplest arithmetic calculations. Today, zero — both as a symbol (or numeral) and a concept meaning the absence of any quantity — allows us to perform calculus, do complicated equations, and to have invented computers.

"The Indian [or numerical] zero, widely seen as one of the greatest innovations in human history, is the cornerstone of modern mathematics and physics, plus the spin-off technology," said Peter Gobets, secretary of the ZerOrigIndia Foundation, or the Zero Project. The foundation, based in the Netherlands, researches the origins of the zero digit.

Zero as a placeholder was invented independently in civilizations around the world, said Dr. Annette van der Hoek, Indiologist and research coordinator at the Zero Project. The Babylonians got their number system from the Sumerians, the first people in the world to develop a counting system. Developed 4,000 to 5,000 years ago, the Sumerian system was positional — the value of a symbol depended on its position relative to other symbols.

Robert Kaplan, author of "The Nothing That Is: A Natural History of Zero," suggests that an ancestor to the placeholder zero may have been a pair of angled wedges used to represent an empty number column. However, Charles Seife, author of "Zero: The Biography of a Dangerous Idea," disagrees that the wedges represented a placeholder.

The Sumerians' system passed through the Akkadian Empire to the Babylonians around 300 B.C. There, Kaplan agrees, a symbol appeared that was clearly a placeholder — a way to tell 10 from 100 or to signify that in the number 2,025, there is no number in the hundreds column. Initially, the Babylonians left an empty space in their cuneiform number system, but when that became confusing, they added a symbol — double angled wedges — to represent the empty column. However, they never developed the idea of zero as a number.

Zero in the Americas

Six hundred years later and 12,000 miles from Babylon, the Mayans developed zero as a placeholder around A.D. 350 and used it to denote a placeholder in their elaborate calendar systems. Despite being highly skilled mathematicians, the Mayans never used zero in equations, however. Kaplan describes the Mayan invention of zero as the "most striking example of the zero being devised wholly from scratch."

India: Where zero became a number

Some scholars assert that the Babylonian concept wove its way down to India, but others, including those at the Zero Project, give Indians credit for developing numerical zero independently. "We are of the view that in ancient India are found numerous so-called 'cultural antecedents' that make it plausible that the mathematical zero digit was invented there," said Gobets, whose organization is composed of academics and graduate students devoted to studying the development of zero in India. "The Zero Project hypothesizes that mathematical zero ('shunya', in Sanskrit) may have arisen from the contemporaneous philosophy of emptiness or Shunyata," said Gobets. If philosophical and cultural factors found in India were important to the development of zero as a mathematical concept, it would explain why other civilizations did not develop zero as a mathematical concept, said van der Hoek.

According to the book "The Crest of the Peacock; Non-European Roots of Mathematics," by Dr. George Gheverghese Joseph, the concept of zero first appeared in India around A.D. 458. Joseph suggests that the Sanskrit word for zero, śūnya, which meant "void" or "empty" and derived from the word for growth, combined with the early definition found in the Rig-veda of "lack" or "deficiency." The derivative of the two definitions is Śūnyata, a Buddhist doctrine of "emptiness," or emptying one's mind from impressions and thoughts.

"From this philosophy, we think that a numeral to use in mathematical equations developed," said van der Hoek. "We are looking for the bridge between Indian philosophy and mathematics."

"Zero and its operation are first defined by [Hindu astronomer and mathematician] Brahmagupta in 628," said Gobets. He developed a symbol for zero: a dot underneath numbers. "But he, too, does not claim to have invented zero, which presumably must have been around for some time," Gobets added.

An inscription on a temple wall in Gwalior, India, dates back to the ninth century, and has been considered the oldest recorded example of a zero, according to the University of Oxford. Another example is an ancient Indian scroll called the Bhakshali manuscript. Discovered in a field in 1881, researchers thought it also had originated in the ninth century. However, recent carbon dating has revealed that it was probably written in the third or fourth century, which pushes the earliest recorded use of zero back 500 years.

Marcus du Sautoy, a professor of mathematics at the University of Oxford, said, "Today we take it for granted that the concept of zero is used across the globe and is a key building block of the digital world. But the creation of zero as a number in its own right, which evolved from the placeholder dot symbol found in the Bakhshali manuscript, was one of the greatest breakthroughs in the history of mathematics.

"We now know that it was as early as the third century that mathematicians in India planted the seed of the idea that would later become so fundamental to the modern world. The findings show how vibrant mathematics have been in the Indian sub-continent for centuries."

From the Middle East to Wall Street

Over the next few centuries, the concept of zero caught on in China and the Middle East. According to Nils-Bertil Wallin of YaleGlobal, by 773, zero reached Baghdad where it became part of the Arabic number system, which is based upon the Indian system.

A Persian mathematician, Mohammed ibn-Musa al-Khowarizmi, suggested that a little circle should be used in calculations if no number appeared in the tens place. The Arabs called this circle "sifr," or "empty." Zero was crucial to al-Khowarizmi, who used it to invent algebra in the ninth century. Al-Khowarizmi also developed quick methods for multiplying and dividing numbers, which are known as algorithms — a corruption of his name.

Zero found its way to Europe through the Moorish conquest of Spain and was further developed by Italian mathematician Fibonacci, who used it to do equations without an abacus, then the most prevalent tool for doing arithmetic. This development was highly popular among merchants, who used Fibonacci's equations involving zero to balance their books.

Medieval religious leaders in Europe did not support the use of zero, van der Hoek said. They saw it as satanic. "God was in everything that was. Everything that was not was of the devil," she said.

Wallin points out that the Italian government was suspicious of Arabic numbers and outlawed the use of zero. Merchants continued to use it illegally and secretively, and the Arabic word for zero, "sifr," brought about the word "cipher," which not only means a numeric character, but also came to mean "code."

By the 1600s, zero was used fairly widely throughout Europe. It was fundamental in Rene Descartes' Cartesian coordinate system and in calculus, developed independently by Sir Isaac Newton and Gottfried Wilhem Liebniz. Calculus paved the way for physics, engineering, computers and much of financial and economic theory.

"The concept of emptiness is now central to modern physics: the entire known universe is seen as 'zero sum game' by among others, such as Stephen Hawking," said Gobets.

The numeral and concept of zero, imported from India, has manifested in various ways. "So commonplace has zero become that few, if any, realize it astounding role in the lives of every single person in the world," said Gobets.