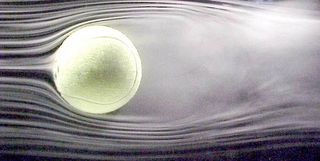 Streaklines show the airflow around a tennis ball.
(Image: © NASA)

Fluid dynamics is "the branch of applied science that is concerned with the movement of liquids and gases," according to the American Heritage Dictionary. Fluid dynamics is one of two branches of fluid mechanics, which is the study of fluids and how forces affect them. (The other branch is fluid statics, which deals with fluids at rest.)

The movement of liquids and gases is generally referred to as "flow," a concept that describes how fluids behave and how they interact with their surrounding environment — for example, water moving through a channel or pipe, or over a surface. Flow can be either steady or unsteady. In his lecture notes, "Lectures in Elementary Fluid Dynamics" (University of Kentucky, 2009) J. M. McDonough, a professor of engineering at the University of Kentucky, writes, "If all properties of a flow are independent of time, then the flow is steady; otherwise, it is unsteady." That is, steady flows do not change over time. An example of steady flow would be water flowing through a pipe at a constant rate. On the other hand, a flood or water pouring from an old-fashioned hand pump are examples of unsteady flow.

Flow can also be either laminar or turbulent. Laminar flows are smoother, while turbulent flows are more chaotic. One important factor in determining the state of a fluid’s flow is its viscosity, or thickness, where higher viscosity increases the tendency of the flow to be laminar. Patrick McMurtry, an engineering professor at the University of Utah, describes the difference in his online class notes, "Observations About Turbulent Flows" (University of Utah, 2000), stating, "By laminar flow we are generally referring to a smooth, steady fluid motion, in which any induced perturbations are damped out due to the relatively strong viscous forces. In turbulent flows, other forces may be acting the counteract the action of viscosity."

Laminar flow is desirable in many situations, such as in drainage systems or airplane wings, because it is more efficient and less energy is lost. Turbulent flow can be useful for causing different fluids to mix together or for equalizing temperature. According to McDonough, most flows of interest are turbulent; however, such flows can be very difficult to predict in detail, and distinguishing between these two types of flow is largely intuitive.

An important factor in fluid flow is the fluid's Reynolds number (Re), which is named after 19th century scientist Osborne Reynolds, although it was first described in 1851 by physicist George Gabriel Stokes. McDonough gives the definition of Re as, "the ratio of inertial to viscous forces." The inertial force is the fluid's resistance to change of motion, and the viscous force is the amount of friction due to the viscosity or thickness of the fluid. Note that Re is not only a property of the fluid; it also includes the conditions of its flow such as its speed and the size and shape of the conduit or any obstructions.

At low Re, the flow tends to be smooth, or laminar, while at high Re, the flow tends to be turbulent, forming eddies and vortices. Re can be used to predict how a gas or liquid will flow around an obstacle in a stream, such as water around a bridge piling or wind over an aircraft wing. The number can also be used to predict the speed at which flow transitions from laminar to turbulent.

The study of liquid flow is called hydrodynamics. While liquids include all sorts of substances, such as oil and chemical solutions, by far the most common liquid is water, and most applications for hydrodynamics involve managing the flow of this liquid. That includes flood control, operation of city water and sewer systems, and management of navigable waterways. [Gallery: Dreamy Images Reveal Beauty in Physics]

Hydrodynamics deals primarily with the flow of water in pipes or open channels. Geology professor John Southard's lecture notes from an online course, "Introduction to Fluid Motions" (Massachusetts Institute of Technology, 2006), outline the main difference between pipe flow and open-channel flow: "flows in closed conduits or channels, like pipes or air ducts, are entirely in contact with rigid boundaries," while "open-channel flows, on the other hand, are those whose boundaries are not entirely a solid and rigid material." He states, "important open-channel flows are rivers, tidal currents, irrigation canals, or sheets of water running across the ground surface after a rain."

Due to the differences in those boundaries, different forces affect the two types of flows. According to Scott Post in his book, "Applied and Computational Fluid Mechanics," (Jones & Bartlett, 2009), "While flows in a closed pipe may be driven either by pressure or gravity, flows in open channels are driven by gravity alone." The pressure is determined primarily by the height of the fluid above the point of measurement. For instance, most city water systems use water towers to maintain constant pressure in the system. This difference in elevation is called the hydrodynamic head. Liquid in a pipe can also be made to flow faster or with greater pressure using mechanical pumps.

The gas most commonly encountered in everyday life is air; therefore, scientists have paid much attention to its flow conditions. Wind causes air to move around buildings and other structures, and it can also be made to move by pumps and fans.

One area of particular interest is the movement of objects through the atmosphere. This branch of fluid dynamics is called aerodynamics, which is "the dynamics of bodies moving relative to gases, especially the interaction of moving objects with the atmosphere," according to the American Heritage Dictionary. Problems in this field involve reducing drag on automobile bodies, designing more efficient aircraft and wind turbines, and studying how birds and insects fly.

Generally, fluid moving at a higher speed has lower pressure than fluid moving at a lower speed. This phenomenon was first described by Daniel Bernoulli in 1738 in his book "Hydrodynamica," and is commonly known as Bernoulli's principle. It can be applied to measure the speed of a liquid or gas moving in a pipe or channel or over a surface.

This principle is also responsible for lift in an aircraft wing, which is why airplanes can fly. Because the wing is flat on the bottom and curved on the top, the air has to travel a greater distance along the top surface than along the bottom. To do this, it must go faster over the top, causing its pressure to decrease. This makes the higher-pressure air on the bottom lift up on the wing.

Scientists often try to visualize flow using figures called streamlines, streaklines and pathlines. McDonough defines a streamline as "a continuous line within a fluid such that the tangent at each point is the direction of the velocity vector at that point." In other words, a streamline shows the direction of the flow at any particular point in the flow. A streakline, according to McDonough, is "the locus [location] of all fluid elements that have previously passed through a given point." A pathline (or particle path), he writes, is "the trajectory of an individual element of fluid." If the flow does not change over time, the pathline will be the same as the streamline. However, in the case of turbulent or unsteady flow, these lines can be quite different.

Most problems in fluid dynamics are too complex to be solved by direct calculation. In these cases, problems must be solved by numeric methods using computer simulations. This area of study is called numerical or computational fluid dynamics (CFD), which Southard defines as "a branch of computer-based science that provides numerical predictions of fluid flows." However, because turbulent flow tends to be nonlinear and chaotic, particular care must be taken in setting up the rules and initial conditions for these simulations. Small changes at the beginning can result in large differences in the results.

The accuracy of simulations can be improved by dividing the volume into smaller regions and using smaller time steps, but this increases computing time. For this reason, CFD should advance as computing power increases.

Jim Lucas is a freelance writer and editor specializing in physics, astronomy and engineering. He is general manager of Lucas Technologies.