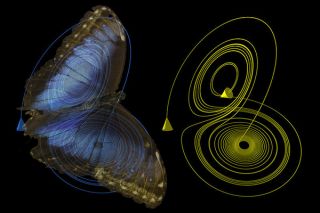 It's poetic, the notion that the flap of a butterfly's wing in Brazil can set off a cascade of atmospheric events that, weeks later, spurs the formation of a tornado in Texas. This so-called "butterfly effect" is used to explain why chaotic systems like the weather can't be predicted more than a few days in advance. One can't know every little factor affecting the atmosphere — every flutter of every butterfly in Brazil — so there's little hope of foreseeing the exact time and place a storm will touch down weeks later.

The butterfly effect is all the more pleasing because the computer model that led to its discovery resembles a butterfly. The mathematician Edward Lorenz created the model, called a strange attractor, in the 1960s; it's a line that alternately spirals around two adjacent ovals, mapping out the chaotic solution to a set of interrelated equations. Lorenz found that the shape of the attractor was extremely sensitive to initial conditions. Moving its starting point just a wing's scale in any direction caused the line to draw a completely different butterfly.

The strange attractor led scientists to conclude that many real-world systems — the stock market, the Texas tornado season — must be similarly unpredictable, and the butterfly effect has continued to be invoked as an explanation of chaos ever since. However, this is in spite of the fact that it's actually false: A butterfly in Brazil can flutter as hard as it likes, but it still can't whip up a tornado in Texas.

"If a butterfly flaps its wings the effect really just gets damped out," the mathematician and writer David Orrell told Life's Little Mysteries.

Each flap of a butterfly's wings exerts a pressure on surrounding air molecules in order to thrust the insect upward. Each flap causes a tiny change in the air pressure around the butterfly, but this fluctuation is insignificant compared to the air's total pressure, which is about 100,000 times larger. Changes in air pressure are one of the key factors involved in changing the weather, but in the case of the butterfly, the air molecules easily absorb the blow of a wing flap, so that a few inches away from a butterfly, the turbulence it causes will have died down. [Explained: The Physics-Defying Flight of the Bumblebee]

Orrell, who has a doctorate in prediction of nonlinear systems from the University of Oxford, writes about prediction-making in fields such as meteorology, biology and economics for both scientific and lay audiences. His best-selling book "The Future of Everything: The Science of Prediction" (Thunder's Mouth Press, 2006) describes the extreme difficulty meteorologists face in forecasting the weather, which is so sensitive to changes in atmospheric conditions like pressure and temperature that it cannot be accurately projected more than a few days in advance. An estimation of the temperature that is off by just a fraction of a degree-Celsius leads to a cascade of errors later, making predictions that look out beyond a few days, but less than a few weeks, particularly challenging.

However, "the changes that make a difference are far bigger than a butterfly flapping its wings," Orrell said.

"I think mathematically, the Lorenz attractor was a very important discovery," he said. "But then it kind of got taken over as a bit of an excuse. People started applying chaos theory to a lot of systems and saying, 'Well, this property is sensitive to initial conditions, so we can't make accurate predictions.'"

In fact, according to Orrell, only in greatly simplified models of chaos like the strange attractor do microscopic changes have huge consequences, escalating and ultimately causing the attractor to diverge from the path it otherwise would have taken. More complex computer models like those used by meteorologists are much more robust. As Orrell and a team of several other mathematicians demonstrated in 2001, inputting butterfly-flapping-scale disturbances into these weather models don't cause the outcomes of the models to diverge. If other factors in the weather system, such as warm Atlantic Ocean temperatures, high humidity and westerly winds with low wind shear, are joining forces to drive the formation of a hurricane, the flap of a wing, or lack thereof, won't stop them.

And the idea that a wing flap really could have an exponentially increasing effect doesn't make much physical sense, anyway, Orrell said. "If you imagine modeling a volume of air and then perturbing it with the flap of a butterfly wing, you wouldn't expect to get an exponentially larger wave coming out of the other end." Modeling the turbulence using cellular automata, a method developed by the mathematician Stephen Wolfram and explained in his famous book "A New Kind of Science" (Wolfram Media, 2002), also shows that the energy from the wing will dissipate, rather than build. In short,  butterflies can't muster up storms. [5 Seriously Mind-Boggling Math Facts ]

So what's the forecast?

If the butterfly effect isn't real, why, then, can't we humans accurately predict the weather more than a few days in advance?

It turns out that the answer to that question is controversial. Based on his research, Orrell believes errors in computer models themselves — for example, an oversimplification of the way atmospheric pressure and humidity interact — affect the outcome of weather systems much more drastically than do small perturbations.  He thinks that meteorologists ought to work on perfecting their models of the atmosphere, rather than throwing their hands up because of chaos.  "My take [is] that model error is a more likely cause of our inability to make weather forecasts than chaos," Orrell said.

Other scientists disagree. Paul Roebber, a mathematician and meteorologist at the University of Wisconsin-Milwaukee, argues that although butterfly-scale chaos does not affect the success of weather prediction, larger perturbations nonetheless play a significant role.

"I agree with [Orrell] that butterfly-scale effects would get damped out, but influences that are still small-scale influences from a weather perspective, such as individual clouds — those effects are much more likely to grow and be important," Roebber said. "So butterflies: OK. But individual clouds: those can very dramatically influence the forecast five to 10 days from now, and until we can resolve those, improvements in our models won't lead to much improvement in our forecasts."

Tim Palmer, an Oxford professor and principal scientist at the European Centre for Medium-Range Weather Forecasts, explained that limitations in our ability to observe the conditions of the atmosphere (such as the locations of all clouds) using weather balloons, surface and satellite measurements, means that we will never be able to input exactly the right initial conditions into our computer models. This isn't always a deal-breaker, but sometimes it is: "When the flow is particularly unstable, errors in initial conditions can grow rapidly and destroy the quality of the forecast in a couple of days. On other occasions, errors in initial conditions will grow more slowly and the forecast will remain skillful for a week or more ahead," Palmer wrote in an email.

According to Roebber, atmospheric convection — the heating and rising of air — is a prime example of a condition that can be inaccurately measured, and which can then give rise to large-scale changes in the weather. For example, convection above the Gulf of Mexico sometimes causes thunderstorms in the southeastern U.S., which then spark snowstorms in the Northeast. [Is All the Wild Weather Connected?]

"To me, the role of atmospheric convection in affecting the large-scale weather and subsequent atmospheric predictability says a lot more about the role of both model errors and analysis errors than the hypothetical butterfly scenario of popular imagination," he said.