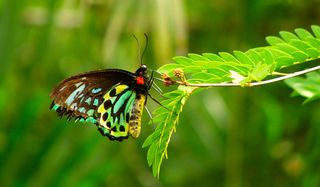 The Queen Alexandra Birdwing (Ornithoptera alexandrae) is the largest living butterfly, with a wingspan that stretches almost a foot across. One the rarest butterflies in the world, it's found only in the rain forests of New Guinea.

The females, which have a chocolate brown body and wings, boast a wingspan of 11 to 12 inches (28 to 31 centimeters) The males are smaller they grow to only 6.7 to 7.4 inches (17 to 19 cm) but they're much more colorful: they sport a bright yellow abdomen topped with electric green and aquamarine wings.

Queen Alexandra Birdwings take about four months to morph from an egg to an adult butterfly. After that, these monster butterflies usually live for another three months, which is actually quite long, considering that most butterflies live for only a month.

During its lifetime, a female Queen Alexandra Birdwings lays only 27 eggs. That low egg output, along with the volcanic eruption of Mount Lamington in 1951, which destroyed large areas of the insect's habitat, has contributed to its current classification by the International Union for Conservation of Nature as an endangered species,

During their caterpillar phase, Queen Alexandra Birdwings feast on the leaves of a poisonous plant species called Pipevine. As a result, they become toxic to predators when they emerge from their cocoons as butterflies, according to the McGuire Center for Lepidoptera and Biodiversity at the Florida Museum of Natural History.

After its discovery in 1907, the species was named after Queen Alexandra, the wife of King Edward VII.