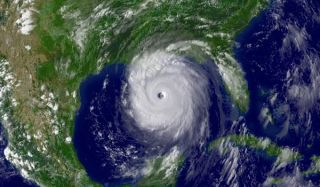 Rather than being a poor pocket of peacefulness trapped by turbulence, terror and torrential rains, the eye of a hurricane is actually more like the evil mastermind of the whole operation.

The formation of an eye — that circular, blue-sky patch in the center of a vortex that is typically 20 to 40 miles (30-65 km) across — almost always indicates that a tropical storm is becoming more organized and stronger. For this reason, meteorologists watch developing storms closely for signs of one. But why do they form?

Like so many complex weather systems, scientists don't fully understand the process. By one count [pdf], hundreds of theories have been put forth as to the exact mechanism of their formation. But they all attempt to flesh out the same general idea:

In a tropical storm, convection causes bands of vapor-filled air to start rotating around a common center. Suddenly, a band of air at a certain radial distance starts rotating more strongly than the others; this becomes the "eyewall" — the region of strongest winds that surrounds the eye in a hurricane. The rotating winds cause updrafts: air that moves from the ocean's surface to the top of the storm. Most of this air then flows out over the storm clouds and down around the outer edge, back to where it started. This sets up a positive feedback loop, which drives the storm's development. [Why Do Hurricanes Often Curve Out to Sea?]

For reasons unknown, not all the air that rises from updrafts flows over the outer edge of the storm; a small amount goes the other way, sinking down through the storm's center. At a certain point, the weight of this rogue air counteracts the strength of the updrafts in the central region. Then it overtakes their strength, but just barely: Air begins to slowly descend in the center of the storm, creating a rain-free area. This is a newly formed eye.

On land, the center of the eye is, by far, the calmest part of the storm, with skies mostly clear of clouds, wind and rain. Over the ocean, however, it's possibly the most dangerous: inside, waves from all directions slam into each other, creating monster waves as tall as 130 feet (40 meters).

Though the passing calmness might lure you out of your home or shelter, the National Weather Service strongly recommends that you stay indoors. People are often caught off guard by violent winds from the opposite side of the eyewall. [6 Tips to Prepare for a Hurricane]

No one fully understands it, but as far as hurricanes are concerned, it goes like this: First an eye, then the world.