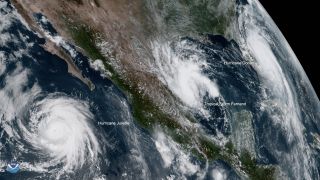 Hurricane Dorian, seen in this satellite view on Sept. 3, 2019, along with two other brewing storms.
(Image: © NOAA)

Hurricane Dorian has strengthened to a Category 3 storm, with sustained winds reaching 115 mph (185 km/h), and it's barreling up the U.S. East Coast toward the Carolinas.

As of 8 a.m. EDT, the National Hurricane Center says the storm's eye — a whopping 50 nautical miles across — was centered about 70 miles (115 kilometers) south-southeast of Charleston, South Carolina. The storm is moving north-northeast at 8 mph (13 km/h), according to the update.

As rescue efforts and cleanup begin in the Bahamas, where reports indicate 20 people have been pronounced dead as of Wednesday (Sept. 4), all eyes are still on Hurricane Dorian. The storm hit the Bahamas Sept. 1 as a Category 5 hurricane with sustained winds of up to 180 mph (285 km/h) — the most intense storm to hit the islands in modern history — stalling there for days.

A low-pressure system that moved down from the Great Lakes region gave the storm a boost in the northward direction, pushing it past Florida, which was saved from a direct hit. By tonight, forecasters anticipate the storm will turn toward the northeast, with an increase in its forward motion on Friday (Sept. 6). Along the modeled track, Dorian is expected to move close to the coast of South Carolina today and then near or over the coast of North Carolina tonight and Friday, according to the 8 a.m. update.

"Residents of these areas should already be prepared for damaging winds, life-threatening storm surges and flooding rains," forecasters said in the NHC update. Life-threatening flash flooding is expected across the eastern Carolinas today, they added.

By Friday night and into Saturday morning (Sept. 7), forecasters say Dorian will move to the southeast of southeastern New England, before approaching Nova Scotia later on Saturday.