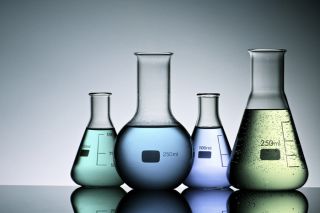 Liquids take on the shape of their container.
(Image: © pedrosala | Shutterstock)

The movement of the particles causes the liquid to be variable in shape. Liquids will flow and fill the lowest portion of a container, taking on the shape of the container but not changing in volume. The limited amount of space between particles means that liquids have only very limited compressibility.

Cohesion is the tendency for the same kind of particles to be attracted to one another. This cohesive "stickiness" accounts for the surface tension of a liquid. Surface tension can be thought of as a very thin "skin" of particles that are more strongly attracted to each other than they are to the particles surrounding them. As long as these forces of attraction are undisturbed, they can be surprisingly strong. For example, the surface tension of water is great enough to support the weight of an insect such as a water skipper. Water is the most cohesive nonmetallic liquid, according to the U.S. Geological Survey.

Cohesive forces are greatest beneath the surface of the liquid, where the particles are attracted to each other on all sides. Particles at the surface are more strongly attracted to the identical particles within the liquid than they are to the surrounding air. This accounts for the tendency of liquids to form spheres, the shape with the least amount of surface area. When these liquid spheres are distorted by gravity, they form the classic raindrop shape.

Adhesion is when forces of attraction exist between different types of particles. Particles of a liquid will not only be attracted to one another, but they are generally attracted to the particles that make up the container holding the liquid. Particles of the liquid are drawn up above the surface level of the liquid at the edges where they are in contact with the sides of the container.

The combination of cohesive and adhesive forces means that a slight concave curve, known as the meniscus, exists at the surface of most liquids. The most accurate measurement of the volume of a liquid in a graduated cylinder will be observed by looking at the volume marks closest to the bottom of this meniscus.

Adhesion also accounts for capillary action when a liquid is drawn up into a very narrow tube. One example of capillary action is when someone collects a sample of blood by touching a tiny glass tube to the blood droplet on the tip of a pricked finger.

Viscosity is a measure of how much a liquid resists flowing freely. A liquid that flows very slowly is said to be more viscous than a liquid that flows easily and quickly. A substance with low viscosity is considered to be thinner than a substance with higher viscosity, which is usually thought of as being thicker. For example, honey is more viscous than water. Honey is thicker than water and flows more slowly. Viscosity can usually be reduced by heating the liquid. When heated, the particles of the liquid move faster, allowing the liquid to flow more easily.

Because the particles of a liquid are in constant motion, they will collide with one another, and with the sides of the container. Such collisions transfer energy from one particle to another. When enough energy is transferred to a particle at the surface of the liquid, it will eventually overcome the surface tension holding it to the rest of the liquid. Evaporation occurs when surface particles gain enough kinetic energy to escape the system. As the faster particles escape, the remaining particles have lower average kinetic energy, and the temperature of the liquid cools. This phenomenon is known as evaporative cooling.

Volatility can be thought of as how likely a substance will be to vaporize at normal temperatures. Volatility is more often a property of liquids, but some highly volatile solids may sublime at normal room temperature. Sublimation happens when a substance passes directly from solid to gas without passing through the liquid state.

When a liquid evaporates inside a closed container, the particles cannot escape the system. Some of the evaporated particles will eventually come into contact with the remaining liquid and lose enough of their energy to condense back into the liquid. When the rate of evaporation and the rate of condensation are the same, there will be no net decrease in the amount of liquid.

The pressure exerted by the vapor/liquid equilibrium in the closed container is called the vapor pressure. Increasing the temperature of the closed system will increase the vapor pressure, according to Purdue University's department of chemistry. Substances with high vapor pressures can form a high concentration of gas particles above the liquid in a closed system. This can be a fire hazard if the vapor is flammable. Any small spark, even one occurring from the friction between the gas particles themselves, can be enough to cause a catastrophic fire or even an explosion. The U.S. Occupational Safety and Health Administration (OSHA) requires Material Safety and Data Sheets to give information about the volatility and flammability of liquids in order to help prevent accidents from occurring.