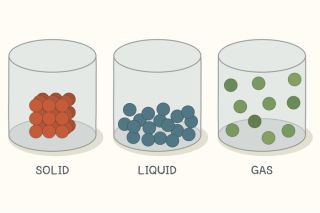 In a solid, molecules are packed together, and it keeps its shape. Liquids take the shape of the container. Gases spread out to fill the container.
(Image: © Arisa J | Shutterstock )

Solid is one of the three main states of matter, along with liquid and gas. Matter is the "stuff" of the universe, the atoms, molecules and ions that make up all physical substances. In a solid, these particles are packed closely together and are not free to move about within the substance. Molecular motion for the particles in a solid is confined to very small vibrations of the atoms around their fixed positions; therefore, solids have a fixed shape that is difficult to change. Solids also have a definite volume; that is, they keep their size no matter how you try to change them.

Solids are divided into two main categories, crystalline solids and amorphous solids, based on how the particles are arranged.

Crystalline solids, or crystals, are regarded as "true solids." Minerals are crystalline solids. Common table salt is one example of this kind of solid. In crystalline solids, the atoms, ions or molecules are arranged in an ordered and symmetrical pattern that is repeated over the entire crystal. The smallest repeating structure of a solid is called a unit cell, which is like a brick in a wall. Unit cells combine to form a network called a crystal lattice. There are 14 types of lattices, called Bravais lattices (named after Auguste Bravais, a 19th-century French physicist), and they are classified into seven crystal systems based on the arrangement of the atoms. The ChemWiki page at the University of California, Davis lists these systems as cubic, hexagonal, tetragonal, rhombohedral, orthorhombic, monoclinic and triclinic.

Aside from the regular arrangement of particles, crystalline solids have several other characteristic properties. They are generally incompressible, meaning they cannot be compressed into smaller shapes. Because of the repeating geometric structure of the crystal, all the bonds between the particles have equal strength. This means that a crystalline solid will have a distinct melting point, because applying heat will break all the bonds at the same time.

Crystalline solids also exhibit anisotropy. This means that properties such as refractive index (how much light bends when passing through the substance), conductivity (how well it conducts electricity) and tensile strength (the force required to break it apart) will vary depending on the direction from which a force is applied. Crystalline solids also exhibit cleavage; when broken apart, the pieces will have planed surfaces, or straight edges.

Ionic compounds form crystals that are composed of oppositely charged ions: a positively charged cation and a negatively charged anion.  Because of the strong attraction between opposite charges, it takes a lot of energy to overcome ionic bonds. This means that ionic compounds have very high melting points, often between 300 and 1,000 degrees Celsius (572 to 1,832 degrees Fahrenheit).

While the crystals themselves are hard, brittle and nonconductive, most ionic compounds can be dissolved in water, forming a solution of free ions that will conduct electricity. They may be simple binary salts like sodium chloride (NaCl), or table salt, where one atom of a metallic element (sodium) is bonded to one atom of a nonmetallic element (chlorine). They may also be composed of polyatomic ions such as NH4NO3 (ammonium nitrate). Polyatomic ions are groups of atoms that share electrons (called covalent bonding) and function in a compound as if they constituted a single charged ion.

Examples of molecular solids include ice, sugar, halogens like solid chlorine (Cl2), and compounds consisting of a halogen and hydrogen such as hydrogen chloride (HCl). Fullerene "buckyballs" are also molecular solids.

In a network solid, there are no individual molecules. The atoms are covalently bonded in a continuous network, resulting in huge crystals. In a network solid, each atom is covalently bonded to all the surrounding atoms. Network solids have similar properties to ionic solids. They are very hard, somewhat brittle solids with extremely high melting points (higher than 1,000 C or 1,800 F). Unlike ionic compounds, they do not dissolve in water, nor do they conduct electricity.

Examples of network solids include diamonds, amethysts and rubies.

Metals are opaque, lustrous solids that are both malleable and ductile. Malleable means they are soft and can be shaped or pressed into thin sheets, while ductile means they can be pulled into wires. In a metallic bond, the valence electrons are not donated or shared as they are in ionic and covalent bonding. Rather, the electron clouds of adjacent atoms overlap so that electrons become delocalized. The electrons move with relative freedom from one atom to another throughout the crystal.

A metal may be described as a lattice of positive cations within a "sea" of negative electrons. This electron mobility means that metals are highly conductive of heat and electricity. Metals tend to have high melting points, though notable exceptions are mercury, which has a melting point of minus 37.84 degrees Fahrenheit (minus 38.8 Celsius), and phosphorous, with a melting point of 111.2 F (44 C).

An alloy is a solid mixture of a metallic element with another substance. While pure metals can be overly malleable and heavy, alloys are more workable. Bronze is an alloy of copper and tin, while steel is an alloy of iron, carbon and other additives.

In amorphous solids (literally "solids without form"), the particles do not have a repeating lattice pattern. They are also called "pseudo solids." Examples of amorphous solids include glass, rubber, gels and most plastics. An amorphous solid does not have a definite melting point; instead, it melts gradually over a range of temperatures, because the bonds do not break all at once. This means an amorphous solid will melt into a soft, malleable state (think candle wax or molten glass) before turning completely into a liquid.

Amorphous solids have no characteristic symmetry, so they do not have regular planes of cleavage when cut; the edges may be curved. They are called isotropic because properties such as refractive index, conductivity and tensile strength are equal regardless of the direction in which a force is applied.