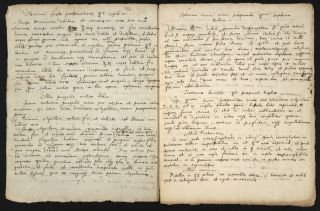 This 17th century manuscript contains instructions that Newton copied from an American alchemist's writings, as well as descriptions of one of Newton's own experiments.
(Image: © Chemical Heritage Foundation)

One of Isaac Newton's 17th-century alchemy manuscripts, buried in a private collection for decades, reveals his recipe for a material thought to be a step toward concocting the magical philosopher's stone.

The "philosopher's stone" was a mythical substance that alchemists believed had magical properties and could even help humans achieve immortality.

The manuscript turned up at an auction at Bonhams in Pasadena, California, on Feb. 16, where the Chemical Heritage Foundation (CHF) in Philadelphia bought it. The alchemy text will be available in an online repository for those interested in the history of modern chemistry, according to James Voelkel, the CHF's curator of rare books.

The handwritten document contains instructions for making "philosophic" mercury that Newton copied from a text by another known alchemist. Written in Latin, its title translates to "Preparation of the [Sophick] Mercury for the [Philosophers'] Stone by the Antimonial Stellate Regulus of Mars and Luna from the Manuscripts of the American Philosopher."

"This manuscript is of great interest to us because it is part of Isaac Newton's alchemical activity," Voelkel told Live Science. "It's a sign of his readings, interest and experiments in alchemy." [Mad Geniuses: 10 Odd Tales About Famous Scientists]

Up until the 18th century, alchemists believed that metals could be broken down into their constituent parts and be transmuted into other, more expensive metals, like gold. They developed extensive symbolism and wrote numerous manuscripts in secret codes, all as part of an elaborate process to weed out those who were unworthy of their lofty goals, Voelkel said. It was these early alchemical experiments that gave rise to modern chemistry, Voelkel added.

Making philosophic mercury was just one of the steps of the alchemical process. It could be used to make the philosopher's stone, a mythical substance that alchemists believed had magical properties. They believed that it could not only transform lead into gold, but also help humans achieve immortality. For those reasons, it was the most sought-after substance in alchemy, also called "chymistry" in 17th-century England.

Newton's recipe for philosophic mercury was originally written by an American chemist named George Starkey, Voelkel said. Starkey studied at Harvard University and moved to England in 1650 to work with eminent chemists of the time. He ended up working with Robert Boyle, one of Newton's contemporaries. But Starkey published under the pseudonym Eirenaeus Philalethes, allowing him to control other chemists' access to his experiments, Voelkel said.

Although historians can't tell if Newton carried out Starkey's alchemy experiment himself, Voelkel said it was very likely that he did. In fact, Newton made notes and corrected a mistake in Starkey's original text. On the back of the manuscript, he also wrote down one of his own experiments for distilling lead ore.

Though best known for his study of gravity and his laws of motion, Newton also apparently wrote more than a million words of alchemical notes throughout his lifetime, historians have estimated, Voelkel said. But most of his handwritten manuscripts were sold by his descendants at Sotheby's in London in 1936. As a result, many documents were purchased by private collectors. Some of those were donated or sold back to public institutions over the years, Voelkel said. But this particular text resurfaced at Sotheby's in New York in December 2004, was offered again at Bonhams in 2009, and finally sold at Bonhams in Pasadena Feb. 14, s2016.

Now that the CHF has purchased the manuscript, it will be added to The Chymistry of Isaac Newton project, an online repository curated by Indiana University, so it can be shared and studied more widely, Voelkel said.