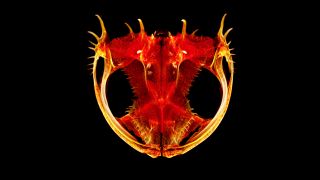 Bony spikes on the skull of Anotheca spinosa, a tree frog from Central America, may protect it against predators.
(Image: © Florida Museum/Image by Edward Stanley)

Each week at Live Science we find the most interesting and informative articles we can. Along the way, we uncover some amazing and cool images. Here you'll discover the most incredible photos we found this week, and the remarkable stories behind them.

The spiky splendor of frog skulls

While most frogs have smooth, rounded skulls, a number of species have skulls that are pointy, spiky, extra-wide or shovel-shaped, and scientists recently captured amazing images that showcase this diversity.

Color variations in the images illuminate differences in bone density in parts of the frogs' skulls, which is linked to the function of those structures. Researchers discovered that some of these unusual skull features appeared multiple times in different frog lineages, separated by millions of years of evolution.

[Read full story: Frogs' skulls are more bizarre (and beautiful) than you ever imagined]

About 70 million years ago, a cousin of Velociraptor got into a fearsome brawl, according to the injuries left behind on its ribs and sickle-shaped claws. Paleontologists discovered its remains in New Mexico in 2008. They named it Dineobellator notohesperus, which roughly translates to "southwestern Navajo warrior."

This sharp-toothed dinosaur, a hypercarnivore (meaning it almost exclusively ate meat), weighed up to 50 lbs. (22 kilograms), or about as much as a female poodle. (Good luck putting a leash on this critter.)

The Grand Canyon of glaciers

Glaciers are giant slabs of ice sitting on top of continental bedrock. The bedrock below Denman Glacier — a 12-mile wide (20 kilometers) stream of ice in East Antarctica — happens to include the single deepest land canyon on Earth (shown as a dark blue streak in this NASA illustration).

Known as the Denman trough, the canyon plunges 11,000 feet (3,500 meters) below sea level, and is almost entirely filled with glacial ice. That could pose a serious problem for Denman Glacier as global warming continues to push the glacier's underwater edge farther and farther into the canyon. According to a new study of satellite data, Denman Glacier has already retreated nearly 3 miles (5 km) between 1996 and 2018, gradually moving backward down the canyon's slope and introducing more and more warm ocean water to the Denman trough. That water further weakens the glacier, making total collapse all the more likely.

The global response to the novel coronavirus pandemic is so intense that it's visible from space. As people around the world are staying at home and practicing "social distancing," satellites have captured incredible views of what used to be some of the most crowded places on Earth, which have now become desolate in the face of the coronavirus.

Take this image of the Colosseum (snapped by Maxar's WorldView satellite). The iconic site, which saw 7.4 million visitors in 2018, sits deserted on the empty streets of Rome on March 18, 2020. Italy is experiencing one of the worst COVID-19 outbreaks outside of China (the number of confirmed cases is second only to coronavirus in the United States) and much of the country remains in lockdown.

The "tree of life" gets a downgrade

A towering ponderosa pine discovered in the center of Chaco Canyon in New Mexico, known as the "Plaza Tree," was once thought to symbolize life and the center of the world for an ancient pueblo town. But new research suggests it may have been just a giant log no one bothered to move for 800 years, and maybe didn't hold significant meaning.

The solitary tree was once thought to represent the living "center of the world" for the people of Pueblo Bonito, the largest of Chaco Canyon's "great houses," which was occupied between A.D. 850 and 1150. In a new study, researchers probed that claim by analyzing documents about the tree's 1924 discovery, calculating the levels of strontium isotopes (which can identify where it came from) within samples of its wood, and measuring the width of its tree rings. The researchers found that the tree ring width and the strontium isotopes of the Plaza Tree didn't match those of ponderosa pine trees that grew around Chaco Canyon — instead, they closely matched trees that grew in the Chuska Mountains, about 50 miles (80 kilometers) west.

"I think the tree was dead when it was transported into the canyon," said study lead researcher Chris Guiterman, an assistant research scientist who studies ancient trees at the University of Arizona in Tucson. Rather than being a totem of religious significance, the pine may have simply "been a bench, or intended for fuelwood," the researchers wrote.

[Read more: Chaco canyon's famous 'tree of life' may have just been a bench]

Peacock spiders (genus Maratus) are known for their luminous badonkadonks, which males use to dazzle potential mates through sexy spider courtship dances. Scientists have discovered 85 species of peacock spiders since the late 1800s, each arachnid decked out in a unique pattern of iridescent scales that some researchers have labeled "the world's smallest rainbows."

Now, an entomologist with Museums Victoria in Australia has described seven brand-new species of peacock spiders, thanks largely to crowd-sourced photos sent in from citizen scientists across the continent (all but one Maratus spider lives in Australia; the outlier was discovered in China). Included among the new species is the looker shown above — Maratus constellatus, which entomologist Joseph Schubert named in honor of the twinkling blue-and-yellow heavens in Vincent van Gogh's "The Starry Night."

He may be venomous, but M. constellatus can wiggle his shiny butt at us anytime.

The golden age of donkey polo

Scientists recently found the first evidence that nobles in imperial China played donkey polo, in the tomb of a wealthy, important woman who died in Xi'an more than 2,000 years ago.

The woman, named Cui Shi, was buried with donkeys, possibly so she could keep playing donkey polo in the afterlife, researchers reported in a new study. When the tomb was first discovered in 2012, it was thought that the donkeys were pack animals. But when scientists examined the donkeys' bones for the new study, they found that not only were the donkeys smaller than average, the shafts of their leg bones were thicker than was typical in donkeys, suggesting that the animals had a different type of gait than donkeys bred for carrying heavy loads at a slow and steady pace.

"Given the importance of polo in that time and place — and in her family — and the unusual locomotion of these donkeys, we came to conclude that they were very likely used for polo," study co-author Fiona Marshall told Live Science.

The glow at the edge of the planet

In Earth's uppermost atmosphere, a dazzling light show occurs 365 days a year. Known as airglow, the phenomenon happens when solar radiation collides with the ionosphere — the top layer of Earth's atmosphere, which stretches from 50 miles to over 400 miles (80 to 643 kilometers) above the planet — producing a visible orange glow.

This photo of a recent airglow was snapped by NASA’s Ionospheric Connection Explorer, or ICON satellite, which will spend the next two years monitoring the ionosphere to better understand how space weather impacts our planet's atmosphere from day to day.

"The science team is using the data to track height and density of the ionosphere during both daylight hours and night, the behavior of intermingling gases in contrast to the neutral atmosphere, and the effect that winds and weather patterns in the upper atmosphere have on the region," Virginia Tech's Jama Green wrote in a news release.

Hippos that were brought to Colombia decades ago by Pablo Escobar, the notorious cocaine kingpin, are now thriving in the country's river ecosystems. Scientists even suspect that river habitats may benefit from the presence of these non-native hippos, with the large herbivores filling an ecological niche that has been vacant in the region for thousands of years.

Escobar imported four hippos from America in 1981, for a private zoo at his hacienda near Medellín, Colombia. After his drug empire collapsed, the hippos escaped and have been breeding in the wild ever since, now numbering 80 individuals or more, Scientific American reported. The last big herbivore to roam that part of South America was the giant llama Hemiauchenia paradoxa, which vanished around 11,000 years ago. It's possible the hippos could enrich the local soil as the llamas and other extinct herbivores once did, by pooping nutrients back onto land and water, the researchers wrote.

However, it's also possible that the new glut of hippo poo could damage the local ecosystem ; researchers previously noted that in Kenya, river runoff saturated with hippo poo led to 13 mass die-offs in fish, in which fish suffocated in oxygen-poor water, Live Science previously reported.

The warp in our stars

The Milky Way is totally twisted. According to data from the European Space Agency's Gaia satellite, our galaxy curls up on one side and points down on the other, creating a warped shape. Weirder still, the warp appears to be moving around the galaxy, and quite quickly.

In a recent study, astronomers measured the speed at which the warp migrates around the galaxy and determined that previous explanations — like the influence of dark matter or the pull of a magnetic field — could only explain much slower-moving changes. The most likely explanation for the warp's speed? The Milky Way must be in the midst of a long collision with a much smaller galaxy, the researchers wrote.

Which galaxy caused this collision remains a mystery. One possible candidate is the dwarf galaxy Sagittarius, which scientists say likely did move through the Milky Way disk a few times in the past.

The South Pole may have once hosted a massive rainforest 90 million years ago, new fossil evidence suggests. In a new study, researchers examined a long sediment core drilled from West Antarctica's Pine Island Glacier in 2017. The core, which contains soil samples dating back to the Cretaceous period (145 million to 66 million years ago), contains fossilized roots, pollen, spores and remnants of plants from roughly 90 million years ago, suggesting that Antarctica once hosted a dense, swampy forest similar to those seen in New Zealand today.

The team's analysis also showed that the South Pole had an average climate of around 53 degrees Fahrenheit (12 degrees Celsius) at the time. That's not too surprising, given that the mid-Cretaceous is considered one of the warmest times in the past 140 million years. Sea levels were 550 higher (170 meters) than today and sea-surface temperatures in the tropics could have been as high as 95 F (35 C), the researchers wrote. Still — little was known about the environment south of the Polar Circle until now, making this ancient rainforest a true surprise.