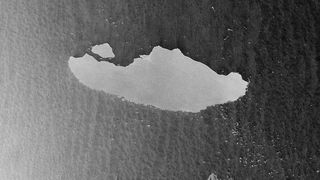 While this is the second major calving event A-68 has seen since it broke free of the Larsen C Ice Shelf in July 2017, the crack could represent the beginning of the end for the iceberg, glaciologist Adrian Luckman told BBC News.

"I suspect that the final breakup is now starting, but the ensuing fragments will probably be with us for years," said Luckman, a glaciologist at Swansea University in the U.K. who has followed the iceberg's progress over the past three years.

Is this the beginning of the end for Iceberg A68? @ESA_EO #Sentinel1 captures a 175 sq km piece breaking off on 23rd April. At more than 19 km long, this new iceberg will probably get its own name pic.twitter.com/9CkqVhiL7bApril 23, 2020

When A-68 first split from Antarctica, it measured more than 2,300 square miles (6,000 square km) in area — roughly large enough to fit the five boroughs of New York City five times over. A-68 instantly became the world's largest free-floating slab of ice, and still holds that title today despite shrinking down to 2,000 square miles (5,100 square km) in area over the last three years while bumping around the crowded Weddell Sea. (Note: It is not the largest iceberg ever identified — that honor goes to iceberg B-15, which calved off of Antarctica in 2000 and measured 4,200 square miles, or 11,000 square km, before breaking up.)

Despite its impressive size, A-68 is remarkably thin. "At 100 miles (160 km) long by only a couple of hundred meters thick, the aspect ratio of Iceberg A-68 is more like a credit card than a typically imagined iceberg," Luckman previously wrote on his website.

"I am continually amazed that something so thin and fragile has lasted so long on the open sea," he added in his interview with BBC News.

That thinness makes A-68 especially vulnerable to the strong currents and increasingly warm temperatures that await it north of Antarctica. Further splits will likely follow, Luckman said, and A-68 as we know it will be no more. However, he added, the berg will likely live on for many years through the constituent chunks that crack off its edges, many of which will be large enough to earn their own names. That includes the chunk that broke off on Thursday; according to a tweet from Luckman, the newborn iceberg will likely become known as A-68c. We look forward to watching its slow march toward the iceberg afterlife.