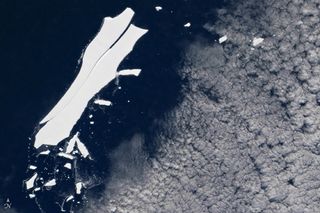 After 18 years of drifting, Antarctica's largest iceberg is about to melt away near South America.
(Image: © NASA/ International Space Station)

If being far from home ever gets you down, just be glad you aren't also melting.

NASA scientists reported that, after drifting for nearly 20 years, the largest iceberg ever to break away from Antarctica's Ross Ice Shelf is about to disappear forever.

Now floating northwest of the South Georgia islands near the tail of South America, the iceberg — named B-15 — has traveled more than 6,600 miles (10,000 kilometers) from the ice shelf and is veering dangerously close to the equator. [Photos: Diving Beneath Antarctica's Ross Ice Shelf]

Satellite images taken from the International Space Station (ISS) on May 22 confirm that the remains of the iceberg are on a crash course with warm tropical waters, where growing pools of meltwater will soon "work [their] way through the iceberg like a set of knives," NASA glaciologist Kelly Brunt said in a statement.

The freewheelin', formerly Connecticut-size iceberg first embarked on its long cruise after breaking away from the Ross Ice Shelf in 2000, NASA said. At the time, it was the largest single chunk of ice ever to split off from the shelf, measuring 160 nautical miles long and 20 nautical miles wide. (That's a total area of 3,200 square nautical miles — larger than the island of Jamaica.)

Currents swept the berg three-quarters of the way around Antarctica; then, it suddenly shifted northward into the southern Atlantic Ocean within the past year or two, NASA said.

The stately raft of ice has gradually splintered into many smaller pieces, most of which have already melted. Today, only four chunks remain with a large enough surface area to be trackable by the National Ice Center (20 square nautical miles is the minimum).

The chunk observed from the ISS last month (its name is B-15Z) still has a surface area of about 50 square nautical miles, but it is likely nearing the end of its journey as it floats ever closer to the equator. According to NASA, icebergs have been known to rapidly melt once they drift into this region. A large fracture is already visible at B-15Z's center, and smaller pieces are crumbling away from its edges.

B-15 will be missed. But its fans may take solace in knowing that, thanks to climate change, another "largest iceberg ever" will probably break away soon enough.