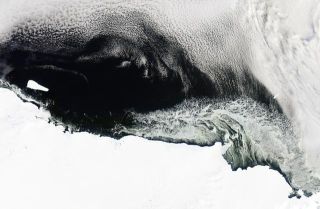 The B-15T iceberg, spotted here off the Mawson Coast in East Antarctica, is a remnant of the world's largest recorded iceberg.
(Image: © NASA)

Spotted near the Mawson Coast in East Antarctica on March 16 by NASA's Aqua satellite, the B-15T iceberg was once part of the 4,250-square-mile (11,000 square kilometers) B-15 iceberg. NASA's satellite snapped a shot of the 13-year-old iceberg floating near the Amery Ice Shelf, far from its birthing ground, the Antarctic Sun reported.

The enormous B-15 berg peeled away from Antarctica' Ross Ice Shelf in March 2000, quickly shattering into a number of smaller ice chunks. But in this case, small is relative, as fragment B-15A was 2,470 square miles (6,400 square km) and clogged McMurdo Sound. The extreme pack ice in McMurdo Sound killed some emperor penguins and forced others to move to less-than-ideal breeding grounds, researchers found.

It's not unusual for icebergs to survive for up to 25 years if they stay in Antarctica's chilly coastal waters, but the ice will quickly melt if they travel north. Scientists spotted another 'berg fragment, B-15J, disintegrating about 1,700 miles (2,700 km) southeast of New Zealand in December 2011.