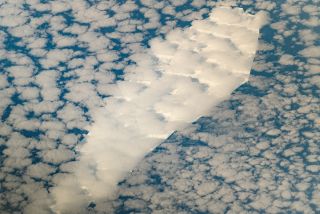 This coffin-shaped iceberg (shown here on Sept. 23, 2018) is part of an iceberg that split from the Ross ice shelf and is now circling in Antarctica's frigid waters.
(Image: © NASA)

Eighteen years ago, a big chunk of ice broke off Antarctica's Ross Ice Shelf, floated out to sea and soon after broke into pieces. One of those pieces, a coffin-shaped iceberg, has now — nearly two decades later — made its way into warmer waters. According to NASA, it's going to die.

For its entire lifetime, this tabular iceberg circled Antarctica in the frigid waters of the Antarctic Circumpolar Current, NASA explained. That's a little closed loop of moving water that can keep icebergs in the southern continent's frigid vicinity for years. It was in this in-between zone that the iceberg, named B-15T, acquired its coffin shape, NASA wrote — the result of collisions with other bergs, along with other factors.

"The coffin shape is an accident of time and space, given the approximately 18.5-year voyage of B-15T," glaciologist Chris Shuman, of NASA and the University of Maryland Baltimore County, said in NASA's statement. "We can only guess at the forces that have acted on this remnant of B-15 along the long way around Antarctica." [Iconic Photos of Earth from Space]

When an astronaut on the International Space Station spotted the iceberg through the clouds and snapped the photo above, the ice chunk had been redirected north, into the southern Atlantic. The lack of other sea ice around it, NASA wrote, suggests that it's in warm waters where it will soon melt.

It will be survived by other remnants of that berg that broke off Antarctica 18 years ago, still circling endlessly in cold southern waters.