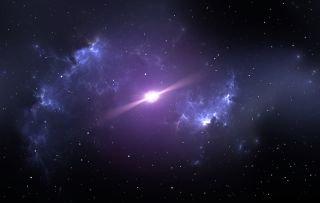 A 3D illustration of a neutron star in the nebula.
(Image: © Shutterstock)

Neutron stars are the remnants of giant stars that died in a fiery explosion known as a supernova. After such an outburst, the cores of these former stars compact into an ultradense object with the mass of the sun packed into a ball the size of a city.

How do neutron stars form?

Ordinary stars maintain their spherical shape because the heaving gravity of their gigantic mass tries to pull their gas toward a central point, but is balanced by the energy from nuclear fusion in their cores, which exerts an outward pressure, according to NASA. At the end of their lives, stars that are between four and eight times the sun's mass burn through their available fuel and their internal fusion reactions cease. The stars' outer layers rapidly collapse inward, bouncing off the thick core and then blasting out again as a violent supernova.

But the dense core continues to collapse, generating pressures so high that protons and electrons are squeezed together into neutrons, as well as lightweight particles called neutrinos that escape into the distant universe. The end result is a star whose mass is 90% neutrons, which can't be squeezed any tighter, and therefore the neutron star can't break down any further.

Characteristics of a neutron star

Astronomers first theorized about the existence of these bizarre stellar entities in the 1930s, shortly after the neutron was discovered. But it wasn't until 1967 that scientists had good evidence for neutron stars in reality. A graduate student named Jocelyn Bell at the University of Cambridge in England noticed strange pulses in her radio telescope, arriving so regularly that at first she thought they might be a signal from an alien civilization, according to the American Physical Society. The patterns turned out not to be E.T. but rather radiation emitted by rapidly spinning neutron stars.

The supernova that gives rise to a neutron star imparts a great deal of energy to the compact object, causing it to rotate on its axis between 0.1 and 60 times per second, and up to 700 times per second. The formidable magnetic fields of these entities produce high-powered columns of radiation, which can sweep past the Earth like lighthouse beams, creating what's known as a pulsar.

The properties of neutron stars are utterly out of this world — a single teaspoon of neutron-star material would weigh a billion tons. If you were to somehow stand on their surface without dying, you'd experience a force of gravity 2 billion times stronger than what you feel on Earth.

Starquakes on the surface of a magnetar — the equivalent of crustal movements on Earth that generate earthquakes — can release tremendous amounts of energy. In one-tenth of a second, a magnetar might produce more energy than the sun has emitted in the last 100,000 years, according to NASA.

Researchers have considered using the stable, clock-like pulses of neutron stars to aid in spacecraft navigation, much like GPS beams help guide people on Earth. An experiment on the International Space Station called Station Explorer for X-ray Timing and Navigation Technology (SEXTANT) was able to use the signal from pulsars to calculate the ISS’s location to within 10 miles (16 km).

But a great deal remains to be understood about neutron stars. For instance, in 2019, astronomers spotted the most massive neutron star ever seen — with about 2.14 times the mass of our sun packed into a sphere most likely around 12.4 miles (20 km) across. At this size, the object is just at the limit where it should have collapsed into a black hole, so researchers are examining it closely to better understand the odd physics potentially at work holding it up.

Researchers are also gaining new tools to better study neutron-star dynamics. Using the Laser Interferometer Gravitational-Wave Observatory (LIGO), physicists have been able to observe the gravitational waves emitted when two neutron stars circle one another and then collide. These powerful mergers might be responsible for making many of the precious metals we have on Earth, including platinum and gold, and radioactive elements, such as uranium.