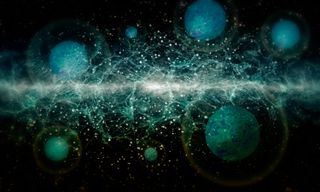 Neutrinos are subatomic particles that zip through the cosmos at nearly the speed of light.
(Image: © Shutterstock)

Neutrinos are elusive subatomic particles created in a wide variety of nuclear processes. Their name, which means "little neutral one," refers to the fact that they carry no electrical charge. Of the four fundamental forces in the universe, neutrinos only interact with two — gravity and the weak force, which is responsible for the radioactive decay of atoms. Having nearly no mass, they zip through the cosmos at almost the speed of light.

Countless neutrinos came into existence fractions of a second after the Big Bang. And new neutrinos are created all the time: in the nuclear hearts of stars, in particle accelerators and atomic reactors on Earth, during the explosive collapse of supernovas and when radioactive elements decay. This means that there are, on average, 1 billion times more neutrinos than protons in the universe, according to physicist Karsten Heeger of Yale University in New Haven, Connecticut.

Despite their ubiquity, neutrinos largely remain a mystery to physicists because the particles are so tough to catch. Neutrinos stream through most matter as if they were light rays going through a transparent window, scarcely interacting with everything else in existence. Approximately 100 billion neutrinos are passing through every square centimeter of your body at this moment, though you won't feel a thing. [The 18 Biggest Unsolved Mysteries in Physics]

Neutrinos were first posited as the answer to a scientific enigma. In the late 19th century, researchers were puzzling over a phenomenon known as beta decay, in which the nucleus inside an atom spontaneously emits an electron. Beta decay seemed to violate two fundamental physical laws: conservation of energy and conservation of momentum. In beta decay, the final configuration of particles seemed to have slightly too little energy, and the proton was standing still rather than being knocked in the opposite direction of the electron. It wasn't until 1930 that physicist Wolfgang Pauli proposed the idea that an extra particle might be flying out of the nucleus, carrying with it the missing energy and momentum.

"I have done a terrible thing. I have postulated a particle that cannot be detected," Pauli said to a friend, referring to the fact that his hypothesized neutrino was so ghostly that it would barely interact with anything and would have little to no mass.

More than a quarter century later, physicists Clyde Cowan and Frederick Reines built a neutrino detector and placed it outside the nuclear reactor at the atomic Savannah River power plant in South Carolina. Their experiment managed to snag a few of the hundreds of trillions of neutrinos that were flying from the reactor, and Cowan and Reines proudly sent Pauli a telegram to inform him of their confirmation. Reines would go on to win the Nobel Prize in Physics in 1995 — by which time, Cowan had died.

But since then, neutrinos have continually defied scientists' expectations.

The sun produces colossal numbers of neutrinos that bombard the Earth. In the mid-20th century, researchers built detectors to search for these neutrinos, but their experiments kept showing a discrepancy, detecting only about one-third of the neutrinos that had been predicted. Either something was wrong with astronomers' models of the sun, or something strange was going on.

Physicists eventually realized that neutrinos likely come in three different flavors, or types. The ordinary neutrino is called the electron neutrino, but two other flavors also exist: a muon neutrino and a tau neutrino. As they pass through the distance between the sun and our planet, neutrinos are oscillating between these three types, which is why those early experiments — which had only been designed to search for one flavor — kept missing two-thirds of their total number.

But only particles that have mass can undergo this oscillation, contradicting earlier ideas that neutrinos were massless. While scientists still don't know the exact masses of all three neutrinos, experiments have determined that the heaviest of them must be at least 0.0000059 times smaller than the mass of the electron.

In 2011, researchers at the Oscillation Project with Emulsion-tRacking Apparatus (OPERA) experiment in Italy caused a worldwide sensation by announcing that they had detected neutrinos traveling faster than the speed of light — a supposedly impossible enterprise. Though widely reported in the media, the results were greeted with a great deal of skepticism from the scientific community. Less than a year later, physicists realized that faulty wiring had mimicked a faster-than-light finding, and neutrinos went back to the realm of cosmically law-abiding particles.

But scientists still have much to learn about neutrinos. Recently, researchers from the Mini Booster Neutrino Experiment (MiniBooNE) at Fermi National Accelerator Laboratory (Fermilab) near Chicago have provided compelling evidence that they've detected a new type of neutrino, called a sterile neutrino. Such a finding corroborates an earlier anomaly seen at the Liquid Scintillator Neutrino Detector (LSND), an experiment at Los Alamos National Laboratory in New Mexico. Sterile neutrinos would upend all of known physics because they don't fit into what's known as the Standard Model, a framework that explains almost all known particles and forces except gravity.

If MiniBooNE's new results hold up, "That would be huge; that's beyond the Standard Model; that would require new particles ... and an all-new analytical framework," particle physicist Kate Scholberg of Duke University told Live Science.