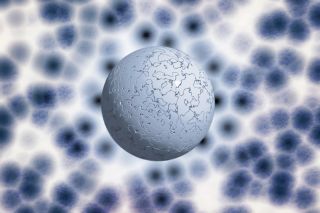 Every single second of every single day, you are being bombarded by trillions upon trillions of subatomic particles, showering down from the depths of space. They blow through you with the strength of a cosmic hurricane, blasting in at nearly the speed of light. They're coming from all over the sky, at all times of the day and night. They penetrate the Earth's magnetic field and our protective atmosphere like so much butter.

And yet, the hair on the top of your head isn't even ruffled.

These tiny little bullets are called neutrinos, a term coined in 1934 by the brilliant physicist Enrico Fermi. The word is vaguely Italian for "little neutral one," and their existence was hypothesized to explain a very curious nuclear reaction. [The Biggest Unsolved Mysteries in Physics]

Sometimes elements feel a little … unstable. And if they're left alone for too long, they fall apart and transform themselves into something else, something a little bit lighter on the periodic table. In addition, a little electron would pop out. But in the 1920s, careful and detailed observations of those decays found tiny, niggling discrepancies. The total energy at the start of the process was a tiny bit greater than the energy coming out. The math didn't add up. Odd.

So, a few physicists concocted a brand-new particle out of whole cloth. Something to carry away the missing energy. Something small, something light, something without charge. Something that could slip through their detectors unnoticed.

A little, neutral one. A neutrino.

It took another couple decades to confirm their existence — that's how slippery and wily and sneaky they are. But in 1956, neutrinos joined the growing family of known, measured, confirmed particles.

And then things got weird.

The trouble started brewing with the discovery of the muon, which coincidentally occurred about the same time that the neutrino idea was beginning to gain ground: the 1930s. The muon is almost exactly like an electron. Same charge. Same spin. But it's different in one crucial way: It's heavier, over 200 times more massive than its sibling, the electron.

Muons participate in their own particular kinds of reactions, but don't tend to last long. Because of their impressive bulk, they're very unstable and quickly decay into showers of smaller bits ("quickly" here means within a microsecond or two).

That's all well and good, so why do muons figure into the neutrino story?

Physicists noticed that decay reactions that suggested the existence of the neutrino always had an electron pop out, and never a muon. In other reactions, muons would pop out, and not electrons. To explain these findings, they reasoned that neutrinos always matched up with electrons in these decay reactions (and not any other kind of neutrino), while electron, the muon must pair with an as-yet undiscovered type of neutrino.. After all, the electron-friendly neutrino wouldn't be able to explain the observations from the muon events. [Wacky Physics: The Coolest Little Particles in Nature]

And so the hunt went on. And on. And on. It wasn't until 1962 that physicists finally got a lock on the second kind of neutrino. It was originally dubbed the "neutretto," but more rational heads prevailed with the scheme of calling it the muon-neutrino, since it always paired itself in reactions with the muon.

The Way of the Tao

Okay, so two confirmed neutrinos. Did nature have more in store for us? In 1975, researchers at the Stanford Linear Accelerator Center bravely sifted through mountains of monotonous data to reveal the existence of an even heavier sibling to the nimble electron and hefty muon: the hulking tau, clocking in at a whopping 3,500 times the mass of the electron. That's a big particle!

So immediately the question became: If there's a family of three particles, the electron, the muon and the tau … could there be a third neutrino, to pair with this newfound creature?

Skipping over a lot of gruesome details, over the decades, physicists convinced themselves using a variety of experiments and observations that a third neutrino ought to exist. But it wasn't until the edge of the millennium, in 2000, that a specifically designed experiment at Fermilab (called humorously the DONUT experiment, for Direct Observation of the NU Tau, and no, I'm not making that up) finally got enough confirmed sightings to rightly claim a detection.

So, why do we care so much about neutrinos? Why have we been chasing them for over 70 years, from before World War II into the modern era? Why have generations of scientists been so fascinated by these little, neutral ones?

The reason is that neutrinos continue to live outside our expectations. For a long time, we weren't even sure they existed. For a long time, we were convinced they were completely massless, until experiments annoyingly discovered that they must have mass. Exactly "how much" remains a modern problem. And neutrinos have this annoying habit of changing character as they travel. That's right, as a neutrino travels in flight, it can switch masks among the three flavors.

There might even still be an additional neutrino out there that doesn't partake in any usual interactions — something known as the sterile neutrino, that physicists are hungrily hunting for.

In other words, neutrinos continually challenge everything we know about physics. And if there's one thing we need, both in the past and in the future, it's a good challenge.