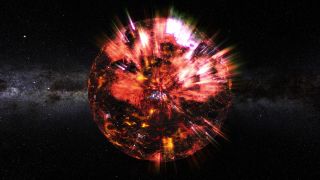 Neutron stars are among the densest objects in the universe.
(Image: © Shutterstock)

A spinning cosmic cadaver is all that's left of a weighty star hovering some 4,600 light-years from Earth after having undergone an explosive death. Now, astronomers have found that this corpse is the most massive neutron star ever discovered.

In fact, they say it's so massive — about 2.14 times the mass of our sun packed into a sphere most likely around 12.4 miles (20 kilometers) across — that it's near the limit of being able to exist at all.

This neutron star, called J0740+6620, emits beacons of radio waves and spins at a dizzying 289 times a second, making it a pulsar. The new estimate for the pulsar's mass makes it heftier than the previous record-holder — a spinning neutron star weighing in at about 2.01 times the mass of the sun, said lead author Thankful Cromartie, a graduate student at the University of Virginia. Figuring out the new record holder's mass "was absolutely thrilling," she added.

The scientists spotted the opportunity to study the stellar corpse in data collected by radio telescopes at the Green Bank Observatory and the Arecibo Observatory. The data came from a collaboration called the North American Nanohertz Observatory for Gravitational Waves, or NANOGrav, with the goal of observing a bunch of these fast-spinning pulsars all across the sky.

While looking at NANOGrav datasets, Cromartie and her team saw "a hint" of a physics phenomenon that would allow them to predict the mass of the pulsar. They then used the Green Bank Telescope in West Virginia to seek out this "hint" in more detail.

The astronomers noticed that, based on the pulsar's location, the radio waves it regularly emitted should have reached the telescope a smidge sooner than they actually did. Called the Shapiro delay, this physics phenomenon happens when another celestial object is orbiting a spinning neutron star, bound by the star's gravity. When the object, in this case a white dwarf star, passes in front of the pulsar, the orbiting object slightly warps the space around where the radio signal would travel, so the radio waves arrive at our telescopes slightly delayed.

Scientists use these delays to calculate the mass of both the pulsar and the white dwarf.

The recent discovery could reveal more information about supernovas and how neutron stars are born, Cromartie said. Typically, when large stars die, they detonate as supernovas. Such an explosion causes the star to collapse on itself, becoming either a neutron star or, if it's really massive, a black hole.

There's a limit to how massive neutron stars can be, Cromartie said. Researchers reported in 2017 that once a star reaches 2.17 times the mass of the sun, that star is doomed to a dark existence as a matter-hungry black hole. This suggests that J0740+6620 is "really pushing that" limit, Cromartie said. Any more massive, and the star would've collapsed into a black hole.

Some really weird physics is thought to occur inside such dense stellar objects,  "The physics occurring in the interior of the stars is still really poorly understood," she said. Finding one that is near the limit of existence could reveal more about what's happening deep inside, but also about how highly dense materials behave, she added.

And so "observing neutron stars in this way is kind of like using a laboratory in space to study nuclear physics," she added. Now, she said, she hopes to make more-regular observations of this pulsar using telescopes such as the Canadian Hydrogen Intensity Mapping Experiment Telescope, or CHIME, and NASA's Neutron Star Interior Composition Explorer Telescope, or NICER, which flies aboard the International Space Station. With those observations, she could fine-tune the mass measurement.

The scientists reported their findings Sept. 16 in the journal Nature Astronomy.