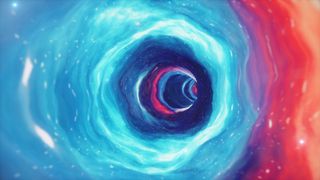 Wormholes, passageways that connect one universe or time to another, are still only theoretical — but that doesn't mean physicists aren't looking for them. In a new study, researchers describe how to find wormholes in the folds of our galaxy.

These hypothetical passageways, created by folding a region of space like a piece of paper, are predicted by Einstein's theory of general relativity. But they require extreme gravitational conditions, such as those around supermassive black holes.

In the new study, two researchers came up with a method to search for wormholes close to home, around the Milky Way's central, supermassive black hole, called Sagittarius A*. If a wormhole were to exist around Sagittarius A*, the stars on one side of the passage would be influenced by the gravity of stars on the other side, the researchers said

Related: 5 Reasons We May Live in a Multiverse

If physicists can detect small changes in the expected orbits of stars, such as a star called S2 that orbits Sagittarius A*, it may indicate that a wormhole is close by, the researchers said in a statement.

Current methods aren't sensitive enough to see the slight changes in orbit that would be caused by a star at the other end of the wormhole, but new techniques and longer observations might render it possible within the next couple of decades, study co-author Dejan Stojkovic, a cosmologist and professor of physics at the University at Buffalo College of Arts and Sciences, said in the statement.

Yet even finding these slight changes in orbit wouldn't prove that a wormhole is nearby, he added. "When we reach the precision needed in our observations, we may be able to say that a wormhole is the most likely explanation if we detect perturbations in the orbit of S2," Stojkovic said. "But we cannot say that, 'Yes, this is definitely a wormhole.'" That is because other unknown celestial objects on our side of the wormhole can also be exerting a gravitational pull and causing the changes.

But not everyone's convinced.

The star's altered trajectory due to a wormhole is "unobservable irrespective of how accurate the measurements are," Serguei Krasnikov, a physicist at the Central Astronomical Observatory at Pulkovo in Russia, who was not involved with the research, wrote in a commentary published in the preprint server arXiv. That's because, even with more-precise measurements, astronomers can only measure the total acceleration of a star, not the additional acceleration caused by the gravitational influence of a star on the other end of a wormhole, he wrote.

But "what we calculate in our paper are variations in acceleration due to the elliptic orbit of a star," on the other side of the wormhole, Stojkovic told Live Science. Because acceleration of the star around the black hole is normally constant, a variation in the measured acceleration would be "a clear indication that there is an additional source of gravitational force."

And even if a wormhole were ever found, it might not be open for voyage.

People and spaceships probably won't be able to pass through a wormhole, because "realistically, you would need a source of negative energy to keep the wormhole open, and we don't know how to do that," Stojkovic said in the statement. "To create a huge wormhole that's stable, you need some magic."

The paper assumes that a stable wormhole can exist, which is not supported by General Relativity, said Jolyon Bloomfield, a lecturer in the department of physics at MIT, who was also not part of the study. "I'm not convinced that the setup is valid, and hence do not trust the results that follow."

If there is any deviation in observed acceleration of stars around Sagittarius A*, it’s "significantly more likely that a modification to General Relativity is being observed, rather than the effects of a wormhole," he told Live Science.

However,  Stojkovic said this concern is addressed by his theory.

"One of the most interesting results in our paper...is that gravitational perturbations propagate through wormholes even if the[y] are non-traversable," Stojkovic said. So "a star S2 can be perturbed by stars on the other side even in the simplest setup required by General Relativity.”

The findings were published Oct. 10 in the journal Physical Review D.