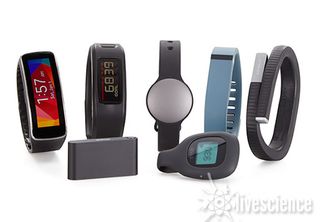 SANTA CLARA, Calif. — The popularity of Fuelbands, Fitbits and other fitness trackers has exploded in the last few years. Yet few people keep using these devices after a few months.

From geeky and ugly designs that make the wrong fashion statement, to difficult user interfaces or confusing or meaningless stats, many fitness trackers are not providing users with valuable information that motivates them to keep using the devices, speculated Kip Fyfe, CEO of 4iiii Innovations Inc., a Canadian wearable technology company, at a presentation here at the IDTechEx conference.

More than a third of people who use fitness trackers abandon them within a few months, according to research from Endeavour Partners, a strategy consulting firm.

Among the people at Fyfe's presentation, the numbers were even starker. When he asked how many people owned a fitness tracker, about 50 hands shot up, but only two people kept their hands up when asked if they were still using them. [Fantasy Fitness Tracker: 8 Absolutely Must-Have Features]

One problem may be that many fitness trackers are intended to be worn on the wrist. "The wrist is a valuable piece of real estate," Fyfe said.

A visible, gawky-looking wrist-worn tracker may make a personal statement that many people aren't comfortable with, Fyfe said.

"If you're wearing tech on your wrist, you're also saying a little bit about you, and you don't want to have that define you as a person," Fyfe said.

In addition, some of the earlier trackers have confusing interfaces, such as one that requires you to tap the tracker's face for different functions, and some of these trackers don't sync to a phone app. That can make them a hassle to use, he said.

Another problem with fitness trackers is that they provide a lot of numbers, but not enough validation and analysis.

For instance, Nike Fuelbands give people a certain number of "fuel points" for each activity, but what do those points mean? Is walking 10,000 steps, which many trackers set as a default goal, really ideal? And, if so, why? The numbers don't tell people what they care about: whether they are getting fitter, Fyfe said.

That's partly because research hasn't caught up to the plethora of data that can come from these fitness trackers.

Although exercise scientists agree that being more active is better than being a sloth, physiologists don't know the optimal workout routine for the average person, or what having a certain heart rate means during a workout, Fyfe said.

Moreover, many fitness trackers aren't accurate for all types of activity. Someone who is playing a Wii while sitting down might log the same level of activity as someone who is pushing a stroller uphill, for instance. Most heart-rate monitors aren't very accurate unless they're worn against the chest, and the calorie measurements are rough estimates at best. The devices that claim to track sleep use tiny accelerometers that really only track movement, so they sometimes over- or underestimate how much someone sleeps, experts agree.

Because the data isn't reliable, it won't motivate people to change their behavior, and if the trackers aren't motivating people, they'll stop using them, Fyfe said.

For instance, people might stick with a tracker if their insurance would give them a rebate for proving they are active, he said. Others may want to know exactly how many calories they've burned and how that will impact their weight loss. [The Best Fitness Tracker Brands]

And data from the first generation of trackers could improve the predictive power of newer versions. For instance, researchers with the Human Locomotome Project were able to predict which participants in the project would develop Parkinson's disease in the coming years by looking at their activity logs on fitness trackers, Fyfe said.

As more and more people strap on wearable devices, other insights — such as who is likely to develop heart disease or gain weight — could become apparent, Fyfe said. Being able to have a crystal ball on your body that could predict and help avert future health problems would be a major motivator, Fyfe said.