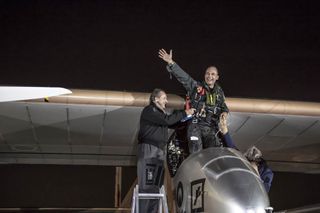 A solar-powered airplane successfully completed the second-to-last leg of its historic cross-country journey on Sunday (June 16), after flying from Cincinnati to Washington, D.C.

The plane, called Solar Impulse, left Cincinnati Municipal Lunken Airport at 10:11 a.m. EDT on Saturday (June 15), and landed at Washington Dulles International Airport Sunday morning at 12:15 a.m. EDT. The flight lasted just over 14 hours, with the aircraft traveling at an average ground speed of 31 mph (50 km/h), according to company officials.

Solar Impulse was originally slated to fly directly from St. Louis to Washington, D.C., but flight officials adjusted the route and added a brief stop in Ohio to dodge bad weather and stay on schedule.

Solar Impulse co-founder and Swiss pilot Bertrand Piccard was at the controls for the flight from Cincinnati to Washington, D.C. Piccard and Solar Impulse's other co-founder, André Borschberg, have alternated piloting the single-seater plane on its coast-to-coast expedition, which kicked off in California on May 3.

"[W]ith the successful completion of these last four U.S. flights, we have shown that we are capable of coping with challenging meteorological conditions for our weather-sensitive plane and for our ground operations, and that we could find each time the right solutions to move forward," Borschberg said in a statement.

Solar Impulse is the first airplane capable of flying day and night without using any fuel. The plane, which is powered entirely by solar panels and onboard batteries, generates about the same amount of power as a small scooter, company officials have said.

The Solar Impulse crew will now spend at least a week in the nation's capital, participating in various public outreach events. Company officials are also expected to conduct a roundtable meeting with U.S. Secretary of Energy Ernest Moniz later today.

In early July, Solar Impulse will complete the final leg of its journey by flying from the nation's capital to New York City. Flight officials have yet to set a departure date, but will continue to monitor weather conditions, company representatives said in a statement.

Each leg of Solar Impulse's flight is being streamed live online, and features up-to-date information on the aircraft's position, altitude and speed. The live feed also includes views inside the airplane's cockpit, and from Solar Impulse's mission control center in Switzerland.