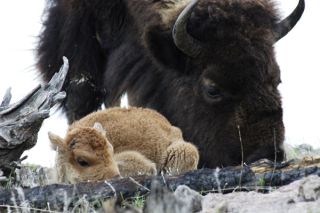 Photo is of a bison and a calf in Yellowstone National Park.
(Image: © Julie Larsen Maher/Wildlife Conservation Society)

Bison could make a big comeback all across North America over the next 100 years, a conservation group said today. Bison once numbered in the tens of millions across the continent, but these icons of the American West were wiped out by commercial hunting and habitat loss. By 1889, fewer than 1,100 individuals remained. 1n 1905, the American Bison Society formed at the current Bronx Zoo headquarters of the Wildlife Conservation Society (WCS) and began efforts to repopulate reserves on the Great Plains with animals from the zoo's herd and other sources. Of the estimated 500,000 bison that exist today, only 20,000 are considered wild; the rest live on private ranches. "One hundred years ago, through our efforts and the efforts of others, the bison was saved from extinction," said WCS President and CEO Steven E. Sanderson. "We are now looking 100 years from now, because we believe there is an ecological future for the bison in the North American landscape." Researchers created a "conservation scorecard" that was used to evaluate possible areas that the keystone American species, whose grazing habits strongly shaped the ecology of North American prairies, could repopulate. To grade the potential areas, the researchers looked at the availability of existing habitat, the potential for interaction with other native species, such as elk, carnivores, prairie dogs and grassland birds, as well as the socio-economic climate of the regions. The study, detailed in the April issue of the journal Conservation Biology, found that a diverse range of landscapes could play host to a resurgence in the bison population. General sites identified by the researchers were grasslands and prairies in the southwestern United States, Arctic lowland taiga in Alaska, and large swaths of mountain forests and grasslands across Canada and the United States. Parts of the Mexican desert could also again support herds that once lived there. "The bison is one of the great living symbols of North America," said study leader Eric Sanderson of the WCS. "This assessment shows us what is possible; that with hard work and ambitious goals, we can restore this iconic species to a surprising amount of its former range over the next century." Other groups contributing to the report include the new American Bison Society, some Native American groups and some ranchers.