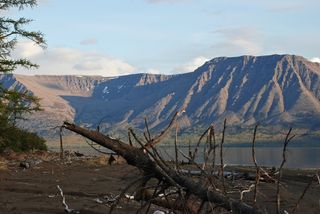 SAN FRANCISCO — Geology is partly detective work, and scientists now have enough evidence to book a suspect in the biggest environmental catastrophe in Earth's history.

Painstaking analysis of rocks from China and Russia prove the culprit is a series of massive volcanic eruptions, which flooded ancient Siberia with thick lava flows just before Earth's worst mass extinction almost 252 million years ago, researchers said here yesterday (Dec. 11) at the annual meeting of the American Geophysical Union. Thanks to new computer models of the eruption's devastating effects, and detailed mapping of rocks deposited around the time of the mass dying, researchers now have their best case ever for pinning the extinction on the enormous lava outpouring.

The eruptions — now called the Siberian Traps — lasted less than 1 million years but left behind Earth's biggest "large igneous province," a pile of lava and other volcanic rocks about 720,000 cubic miles (3 million cubic kilometers) in volume. More than 96 percent of marine creatures and 70 percent of land species perished at the end of the Permian Period, versus 85 percent of life in the later dinosaur-killer extinction. In the Permian, all trilobites died out, along with 97 percent of the gorgeous marine creatures called ammonites. Sharks, fish and reptiles were hard hit.

"We can resolve the timing of the Siberian Traps and show that magmatism did precede the onset of mass extinction," said Seth Burgess, an MIT geochemistry graduate student who presented some of the research here. [Wipe Out: History's Most Mysterious Extinctions]

Many suspects have been named in the environmental mass murder at the end of Permian, including the Siberian Traps, comet impacts, climate change and the breakup of a supercontinent. Resolving the question by dating ancient rocks often leaves a large margin of error, so scientists have been loathe to point a finger at any one cause.

Burgess and his colleagues attacked the timing problem with a high-resolution, uranium-lead dating technique. The team tested volcanic rocks from the Siberian Traps and marine rocks from Meishan, China. Meishan is one of the best-preserved records of the mass extinction, as well as the transition between the Permian and the following Triassic Period. Burgess said the rocks were all analyzed in the same lab, on the same machine, with the same chemicals and by the same lab tech — all to minimize that extra few thousand years of error that scientists must report when estimating rock ages.

New ages for Meishan rock layers above and below Bed 25 also narrow down the duration of the mass extinction event to 60,000 years, plus or minus 40,000 years, Burgess said. The new timeline fits well with a remarkable new rock section from Penglaitan in South China, presented yesterday by Shu-zhong Shen, a paleontologist at the Nanjing Institute of Geology and Paleontology in China. [The World's 10 Weirdest Geological Formations]

At Penglaitan, the extinction lasted only a few thousand years, based on abundant fossil and rock evidence, Shen said. Sixty Permian species disappear in the Penglaitan extinction layer. "The end-Permian mass extinction is sudden," he said. And chemical signatures preserved in the ancient rocks indicate local temperatures jumped 14.4 to 18 degrees Fahrenheit (8 to 10 degrees Celsius) just after the extinction, an extreme warming seen in other places on the planet close to this age.

Other evidence of a major climatic change after the Permian die-off include sudden shifts in ratios of elements such as carbon and oxygen, found worldwide. Researchers have long thought that volcanic gases from the Siberian Traps could have altered Earth's climate. Because the Siberian Traps' magma punched through sedimentary rocks such as coals and carbonates, the eruptions could have cooked the rocks, pouring extra billions of tons of greenhouse gases and toxic metals into Earth's atmosphere, according to modeling studies presented yesterday. Particles similar to fly ash from coal-fired power plants appear in lake sediments on Canada's Ellesmere Island, downwind of Siberia in the Permian, said Stephen Grasby, a geochemist at Canada's Geological Survey.

Gases such as carbon dioxide and methane warmed the Earth, and sulfur dioxide pelted the Northern Hemisphere with acid rain, researchers said. (Siberia was in the high latitudes 252 million years ago, so gases and ashes circled in the north.) "Rain in the Northern Hemisphere could have been really intensely acidic," said Benjamin Black, a postdoctoral researcher at MIT. "The pH was comparable to undiluted lemon juice."

Black created a computer model of Earth's atmosphere during the Siberian Trap eruptions, when most of Earth's landmasses were jammed together in a supercontinent called Pangaea. A giant ocean called Panthalassa covered the rest of the globe.

Just one year's worth of volcanism from the Siberian Traps, or about 57 cubic miles (240 cubic km) of lava, could generate 1.46 billion tons of sulfur dioxide and devastate the Northern Hemisphere, Black's study found. [Big Blasts: History's 10 Most Destructive Volcanoes]

The toxic gases pouring from the Earth also created chemical reactions that destroyed the protective ozone layer, raising DNA-damaging ultraviolet radiation over much of the planet, Black said. "Globally, average ozone levels fall below those observed in the Antarctic ozone hole in the 1990s," he said.

In total, more than 1,200 billion tons of methane and 4,000 billion tons of sulfur dioxide could have emerged from the Siberian Traps eruption, said Henrik Svensen, a geologist at the University of Oslo in Norway.

Because Siberia's volcanic eruptions flooded from the Earth for some 900,000 years, geologists are keen to further investigate which events were the killers, and which caused the environmental changes seen after the Permian extinction.

"The future of this work is resolving which part of the Siberian magmatism is related to the mass extinction and which part is the effective driver of environmental change," Burgess said.

Geologists are already trying to solve that puzzle, with new, more precise maps that reveal the eruption history of the Siberian Traps. It turns out the earliest layers, along the Kureika River, have been misidentified, independent volcanologist Dougal Jerram said yesterday.

Instead of rocks formed by volcanic explosions, as previously mapped, Jerram and his colleagues discovered thin lava flows. Then, higher up in the pile where the rocks are younger, the researchers saw a sharp transition appear: The thin layers suddenly grow thicker, meaning more lava started coming out with each eruption. (Like water from a tap, the amount of magma pouring from the Earth — from multiple gashes and vents — waxed and waned through time at the Siberian Traps.)

At this transition zone, "it's like the volcanic taps suddenly switched on," Jerram told LiveScience. Further work could reveal if the massive gush matches with any of the Permian or Triassic disasters.

"We're starting to understand a little bit more about what's happening with the volcanic sequence. There's still quite a lot of work to do," Jerram said.