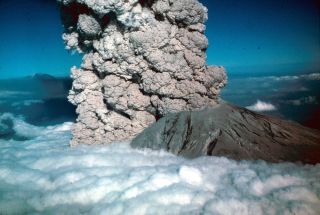 This photograph of the eruption of Mount St. Helens on July 22, 1980, shows a cloud from pyroclastic flow rising through cloud layer.
(Image: © © United States Geologic Survey; Photo by Jim Vallance)

Residents of volcanically active areas, whether prehistoric creatures or modern humans, haven't always had enough warning to escape before a nearby volcano blew its top, sometimes virtually destroying everything for many miles around.

Here are some of the biggest, most destructive volcanic eruptions on Earth, from a series of colossal and sizzling outbursts that occurred about the same time as the dinosaurs went extinct to more recent explosive events like when Mount St. Helens shot a column of dust 15 miles high in 1980. And the countdown wouldn't be complete with Yellowstone supervolcano's enormous eruption some 640,000 years ago (#9 on this list).

The Deccan Traps are a set of lava beds in the Deccan Plateau region of what is now India that cover an area of about 580,000 square miles (1.5 million square kilometers), or more than twice the area of Texas. The lava beds were laid down in a series of colossal volcanic eruptions that occurred between 63 million and 67 million years ago.

The timing of the eruptions roughly coincides with the disappearance of the dinosaurs, the so-called K-T mass extinction, the shorthand given to the Cretaceous-Tertiary extinction. Evidence for the volcanic extinction of the dinosaurs has mounted, though many scientists still support the idea that an asteroid impact did in the dinosaurs. An idea put forth in the April 30, 2015 issue of the journal Geological Society of America Bulletin suggests the meteor impact that created the Chixculub crater actually may have kicked the Deccan Traps eruptions into high gear.

Above is an aerial photo of the Lonar Crater in India, which rests inside of the Deccan Plateau, the massive plain of volcanic basalt rock left over from the eruption.

The history of what is now Yellowstone National Park is marked by many enormous eruptions, the most recent of which occurred about 640,000 years ago, according to the United States Geological Survey. When this gigantic supervolcano erupted, it sent about 250 cubic miles (1,000 cubic kilometers) of material into the air. The eruptions have left behind hardened lava fields and calderas, depressions that form in the ground when material below it is erupted to the surface.The magma chambers thought to underlie the Yellowstone hotspot also provide the park with one of its enduring symbols, its geysers, as the water is heated up by the hot magma that flows underneath the ground.

Until 2016, geologists didn't know for certain the number of eruptions in Idaho and surrounding states that predate Yellowstone's supervolcano. Now, research reported Feb. 10, 2016, in the journal Geological Society of America Bulletin suggests that up to 12 huge volcanic blasts occurred between 8 million and 12 million years ago in Idaho's Snake River Plain. The blasts led up to today's supervolcano, they said.

Some researchers have predicted that the supervolcano will blow its top again, an event that would cover up to half the country in ash up to 3 feet (1 meter) deep, one study predicts. The volcano only seems to go off about once every 600,000 years, though whether it ever will happen again isn't known for sure. In more recent years, tremors have been recorded in the Yellowstone area.

While the date of the eruption isn't known with certainty, geologists think that Thera exploded with the energy of several hundred atomic bombs in a fraction of a second, sometime between 1645 B.C. and 1500 B.C. Though there are no written records of the eruption, geologists think it could be the strongest explosion ever witnessed. The island that hosted the volcano, Santorini (part of an archipelago of volcanic islands) in the Aegean Sea, had been home to members of the seafaring Minoan civilization, though there are some indications that the inhabitants of the island suspected the volcano was going to blow its top and evacuated.

But though those residents might have escaped, there is cause to speculate that the volcano severely disrupted the culture, with the massive amounts of sulfur dioxide it spewed into the atmosphere altering the climate and leading to temperature declines. Associated tsunamis also resulted from the eruption, geologists speculate. In fact, the cataclysmic eruptions may have inspired the legend of the lost city of Atlantis, some say.

In January 2011, the mostly underwater volcano awakened, evidenced by small tremors of about magnitude 3.2, researchers reported. The above image shows the volcanic island of Santorini today.

Mount Vesuvius is a so-called stratovolcano that lies to the east of what is now Naples, Italy. Stratovolcanoes are tall, steep, conical structures that periodically erupt explosively and are commonly found where one of Earth's plates is subducting below another, producing magma along a particular zone.

Vesuvius' most famous eruption buried the Roman towns of Pompeii and Herculaneum in rock and dust in A.D. 79, killing thousands. The ashfall preserved some structures of the town, as well as skeletons and artifacts that have helped archaeologists better understand ancient Roman culture. Vesuvius is also considered by some to be the most dangerous volcano in the world today, as a massive eruption would threaten more than 3 million people who live in the area. The volcano last erupted in 1944. [Preserved Pompeii: Photos Reveal City of Ash]

Iceland's history is dotted with volcanic eruptions. One notable blast, the eruption of Laki volcano in 1783, released trapped volcanic gases that were carried by the Gulf Stream over to Europe. In the British Isles, many died of gas poisoning from the release. The volcanic material sent into the air also created fiery sunsets recorded by 18th-century painters. Extensive crop damage and livestock losses created a famine in Iceland that resulted in the deaths of one-fifth of the population, according to the Smithsonian Institution's Global Volcanism Program. The volcanic eruption, like many others, also influenced the world's climate, as the particles it sent into the atmosphere blocked some of the sun's incoming rays.

In fact, the Laki eruption was blamed for the cold harsh weather during the following winter. But research published online March 15, 2011, in the journal Geophysical Research Letters, suggested another culprit: an unusual combination of climate phenomena, including the negative phase of the the North Atlantic Oscillation, may be to blame. (Shown here, modern-day Laki.)

The explosion of Mount Tambora is the largest ever recorded by humans, ranking a 7 (or "super-colossal") on the Volcanic Explosivity Index, the second-highest rating in the index. The volcano, which is still active, is located on Sumbawa Island and is one of the tallest peaks in the Indonesian archipelago.

The eruption reached its peak in April 1815, when it exploded so loudly that it was heard on Sumatra Island, more than 1,200 miles (1,930 km) away. The death toll from the eruption was estimated at 71,000 people, and clouds of heavy ash descended on may faraway islands. The huge caldera formed by Tambora's eruption, photographed above in 2009, is 3.7 miles (6 km) in diameter and 3,609 feet (1,100 meters) deep. [200 Years After Tambora, Indonesia Most at Risk of Deadly Volcanic Blast]

The rumblings that preceded the final eruption of Krakatoa (also spelled Krakatau) in the weeks and months of the summer of 1883 finally climaxed into a massive explosion on April 26–27.The explosive eruption of this stratovolcano, situated along a volcanic island arc at the subduction zone of the Indo-Australian plate, ejected huge amounts of rock, ash and pumice and was heard thousands of miles away. The explosion also created a tsunami, whose maximum wave heights reached 140 feet (40 meters) and killed about 34,000 people. Tidal gauges more than 7,000 miles (about 11,000 km) away on the Arabian Peninsula even registered the increase in wave heights. While the island that once hosted Krakatoa was completely destroyed in the eruption, new eruptions beginning in December 1927 built the Anak Krakatau ("Child of Krakatau") cone in the center of the caldera that had been produced by the 1883 eruption.

The eruption of Novarupta — one of a chain of volcanoes on the Alaska Peninsula, part of the Pacific Ring of Fire — was the largest volcanic blast of the 20th century. The powerful eruption sent 3 cubic miles (12.5 cubic km) of magma and ash into the air, all of which fell to cover an area of 3,000 square miles (7,800 square km) more than a foot deep. The blast was so powerful that it drained magma from under another volcano, Mount Katmai, 6 miles east, causing the summit of Katmai to collapse to form a caldera half a mile deep. The above photo shows a glacier sitting on Novarupta.

To learn more about the source of the Novarupta eruption scientists have since installed a network of seismometers around the Katmai Volcanoes.

Mount St. Helens, located about 96 miles (154 km) from Seattle, is one of the most active volcanoes in the United States. It's most well-known eruption was the May 18, 1980 blast that killed 57 people and caused damage for tens of miles around.

Over the course of the day, prevailing winds blew 520 million tons of ash eastward across the United States and caused complete darkness in Spokane, Washington, 250 miles from the volcano. The stratovolcano blasted a column of ash and dust 15 miles (24 km) into the air in just 15 minutes; some of this ash was later deposited on the ground in 11 states. The eruption was preceded by a magma bulge on the north face of the volcano, and the eruption caused that entire face to slide away — the largest landslide on Earth in recorded history.

In 2004, the peak came back to life and spewed out more than 26 billion gallons (100 million cubic meters) of lava, along with tons of rock and ash. Though not near an eruption, Mount St. Helens began to recharge in the spring of 2014, with the rise of new magma causing the volcano to heave upward and outward by a smidge, seismologists said. [Gallery: The Incredible Eruption of Mount St. Helens]

Yet another stratovolcano located in a chain of volcanoes created in a subduction zone, the cataclysmic eruption of Pinatubo was a classic explosive eruption. The eruption ejected more than 1 cubic mile (5 cubic kilometers) of material into the air and created a column of ash that rose up 22 miles (35 km). Ash fell across the countryside, even piling up so much that some roofs collapsed under the weight.

The blast also spewed millions of tons of sulfur dioxide and other particles into the air, which were spread around the world by air currents and caused the global temperatures to drop by about 1 degree Fahrenheit (0.5 degree Celsius) over the course of the following year. [Photos: The Colossal Eruption of Mount Pinatubo]