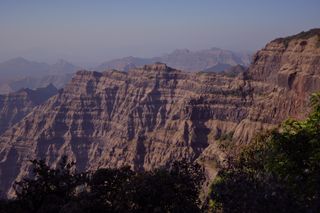 Remember the terrible earthquakes and fiery volcanoes that killed off the dinosaurs in Disney's original "Fantasia"? Those scenes weren't far from the truth, a new study suggests.

According to an international research team, the Chicxulub meteor impact 66 million years ago may have triggered a magnitude-11 earthquake that shook loose massive amounts of lava in India. The findings were published April 30 in the journal Geological Society of America Bulletin.

The mega-eruptions formed the Deccan Traps, a series of massive lava flows that once covered most of India. The lava erupted from many different fractures over a span of several million years. The molten rock emerged from a mantle plume, a giant blob of magma underneath the Earth's crust. The eruptions began well before the Chicxulub impact and ended long after the meteor hit Earth. [Big Blasts: History's 10 Most Destructive Volcanoes]

But about 70 percent of the Deccan Traps lava spewed forth starting within 100,000 years of the impact, said lead study author Mark Richards, a geophysicist at the University of California, Berkeley. "The eruptions may have been kicked into high gear by the Chicxulub impact," Richards told Live Science.

The new model's results differ from those of earlier studies that had suggested the Chicxulub impact melted rock halfway around the Earth. (The impact crater is located offshore Mexico's Yucatán Peninsula.) That's simply not possible, the study's authors concluded. Instead, the researchers say that powerful seismic waves triggered an immense outpouring of existing lava. The eruptions then lasted several hundred thousand years, burying India under molten rock. They estimate the meteor impact was as strong as a magnitude-11 earthquake.

"The evidence is circumstantial, but all the arrows keep pointing in the same direction," Richards said.

Because of the rocks' age and the difficulty of dating lava rocks, scientists disagree about when some of the lava flows emerged. However, soils buried between some lava flows suggest the Deccan Traps were on a break before the impact.

The researchers now plan to search for other volcanic eruptions triggered by the impact, such as massive lava outpourings on the ocean floor.

Last year, the research team also traveled to India and collected rock samples that can be used to precisely date the lava flows. The new ages, which are being readied for publication, may help marshal geologic evidence that the impact and the Deccan Traps are closely linked in time, Richards said.

Because the age of the rocks is not well constrained, there is lively debate over whether the Deccan Traps contributed to the Cretaceous mass extinction. The lava flows likely spewed massive amounts of toxic gases and ash into the atmosphere, but scientists can't say for sure whether the effects helped kill off the dinosaurs and other creatures. Studies have dated the mass extinction to within 40,000 years of the meteor impact.