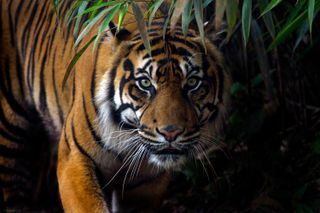 Tigers are iconic creatures, and the largest felines in the world.
(Image: © Shutterstock)

Tigers are the largest felines in the world and as such, many cultures consider the tiger to be a symbol of strength, courage and dignity. The tiger is one of the twelve Chinese zodiac animals, and those born in the "Year of the Tiger" are thought to be brave, competitive and self-confident.

However, because hunting them is also a sign of bravery in some cultures, tigers are endangered. Tigers are hunted for their meat, pelt and body parts that are used in folk remedies. To make matters worse, these great cats have lost most of their habitat due to logging, road building and development, according to All About Wildlife. Experts estimate there are no more than 3,200 tigers left in the wild.

Do all tigers have stripes?

Most tigers have the characteristic orange fur with black or brown stripes, but these markings vary between subspecies. For example, the very large Siberian tiger has pale orange fur with few stripes, while the smaller Sumatran tigers in the Sunda Islands have dark, thickly striped fur.

No two tigers have the same markings, and their stripes are as individual as fingerprints are for humans. In the wild, a tiger's stripes are important for survival, as they act as camouflage, appearing as moving shadows in long grass and in trees, according to National Geographic.

The white Bengal tigers seen in some zoos are the result of a recessive gene, and are not albinos. In fact, it's unlikely that true albino tigers (with pink eyes) exist. Some historical reports detail tigers with black fur and tan stripes, caused by excessive pigmentation, but these accounts are extremely rare.

On the backs of each ear, tigers have a white spot of fur, called ocelli, according to Tigers.org. It's likely the spots act as fake eyes and they may also help tigers communicate with one another.

A tiger's hind legs are longer than its front legs, allowing it to jump up to 32.5 feet (10 meters), according to Sea World. Tiger claws are up to 4 inches (10 centimeters) long, and are used to grab and hold onto their prey.

The largest tiger subspecies, the Siberian, also called Amur, are 10.75 feet (3.3 m) long and weigh up to 660 pounds (300 kilograms), according to National Geographic. The smallest tiger is the Sumatran, which weighs 165 - 308 pounds (74 - 139 kg), according to the World Wildlife Fund (WWF). Tigers also have very long tails, which can add around 3 feet (one m) to their overall length, according to Sea World.

Where tigers live and what they eat

Depending on the subspecies, tigers live in a variety of environments, including arid forests, flooded mangrove forests, tropical forests and taiga (a cold forest with coniferous trees), according to the San Diego Zoo.

All tigers are carnivores. Most of a tiger's diet consists of large prey, such as pigs, deer, rhinos or elephant calves. To kill their prey, tigers clamp down on the animal's neck with their jaws and suffocate the animal. The tiger's canine teeth have pressure-sensing nerves, so it knows exactly where to deliver a fatal bite to its prey, according to the WWF. Though tigers are fierce hunters, they are no strangers to failure, as they are successful in only 10% of their hunts, according to National Geographic.

Tigers are solitary creatures; they like to spend most of their time alone, roaming their massive territories looking for food. According to the San Diego Zoo, the Siberian tiger has the largest range; its territory spans more than 4,000 square miles (10,000 square km). Tigers mark their territory by spraying a mix of urine and scent gland secretions onto trees and rocks. They also scratch marks into trees with their claws.

Tiger babies are born helpless. At birth, a cub weighs 2.2 pounds (1 kg), and a female may have as many as seven cubs at a time, according to the San Diego Zoo. Around half of all cubs don't live beyond the age of two, according to WWF. The mother must leave the cubs while she hunts, leaving them open to other predators. Most tiger mothers are unable to kill enough prey to feed a large litter, so some cubs may die of starvation.

At just 8 weeks old, tiger cubs are ready to learn how to hunt and go out on hunting expeditions with their mother. At 2 years old, the cubs will set out on their own, and their mother will be ready for another set of cubs. In the wild, tigers typically live 10 to 15 years, according to Smithsonian's National Zoo.

For many years, scientists classified tigers into nine subspecies: six living subspecies and three extinct ones. But in recent years, some researchers have challenged the traditional classification. A 2015 study published in the journal Science Advances argued that there are only two subspecies of tigers.

The Javan tiger was last recorded in the 1970s, the Caspian tiger was lost in the 1950s, and the Bali tiger became extinct in the 1930s, according to Panthera, a wild-cat conservation organization.

The International Union for the Conservation of Nature's (IUCN's) Red List of Threatened Species categorizes the Amur/Siberian, Indochinese and Bengal tigers as endangered, and the Sumatran, Malayan and South China Tigers as critically endangered. Most remaining tigers live on wildlife refuges to protect them from poachers.

Poaching is by far the biggest threat facing tigers today. Illegal demand for tiger bones (used in tonics and medicines), tiger skin (seen as a status symbol) and other body parts, is driving the killing and trafficking, which has had an overwhelming impact on tiger populations and resulted in localized extinctions, according to Save Wild Tigers. The continued demand for tiger parts is pushing the species closer and closer to extinction.

In addition to the threat of poaching, only 7% of the tiger's original range remains due to human agriculture, logging, settlements and roads.

This article was updated on Jun. 4, 2019 by Live Science Contributor Traci Pedersen.