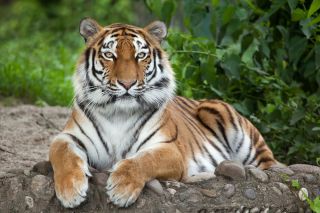 Thousands more tigers may be living in private captivity or as exotic pets in the United States alone than there are anywhere in the wild, based on shocking estimates from a number of conservation organizations, Smithsonian recently reported.

But how did things get so bad? And how do conservation experts know how many tigers are in private captivity, when so many of their owners keep the animals off the grid? [Iconic Cats: All 9 Subspecies of Tigers]

In many states, there are no laws preventing people from owning exotic pets, said Prashant Khetan, CEO of Born Free USA. And in states that do have such laws, they may not be enforced. At the same time, several tiger breeders freely operate in the country, even as tiger habitats are threatened abroad, driving down the animals' numbers in the wild.

The typical person keeping a tiger as a pet, Khetan told Live Science, is wealthy enough to have a lot of land and to set up an enclosure for the big cat. They'll likely see a friend with a tiger or other exotic pet and decide they'd like to have one of their own. Sometimes, they turn the creatures into roadside attractions, he said. Other times, they treat the tigers as expensive luxury items to show off to their friends. Some captive tigers end up in circuses and other groups that turn the animals into entertainment for profit.

Usually, Khetan said, wannabe tiger owners acquire the big cats as cubs when they're cuter and their behavior more closely resembles that of a house cat. That young stage, he said, can give exotic-pet fanciers the illusion that they can reasonably care for a tiger throughout its life. They can't: The full-grown big cats have needs – nutrition, vast space to roam and opportunities to hunt and learn – that private owners just can’t provide.

These tigers, according to Khetan, end up physically diminished compared with their wild cousins — unhappy, and unprepared for anything resembling life in the wild. The best-case scenario for a tiger rescued from a private owner, he said, is retirement to a responsible sanctuary.

Researchers don't have any way to track the U.S. private tiger population directly, Khetan said, though he said the 7,000 figure, almost double the nearly 3,900 in the wild, is probably close to correct.

To arrive at numbers like this, researchers work backward from publicly available data sets, he said. Fourteen states make private tiger owners register their pets. Many owners probably ignore the requirement, he said, but those numbers are still useful for extrapolating the total population.

Similarly, tiger breeders don't typically publicize their sales numbers, Khetan said. But conservation organizations have managed to get ahold of those figures at some points and again use them to extrapolate the total number.

Conservation groups have a few different ways of peering into the dark world of tiger breeding. But one of the most common, according to Khetan, is through the Freedom of Information Act (FOIA). Conservationists file FOIA requests with the USDA after the agency’s occasional run-ins with tiger breeders and glean sales figures and other details from the documents the agency produces.

The reality is that, without substantive policy changes, it will likely remain impossible to get a precise count of the pet-tiger population in the U.S., Khetan said. If he had the power to make policy, he'd not only ban private big-cat ownership (a bill to do just that on a federal level was introduced in the House of Representatives in March 2017 but hasn't gotten any traction or been brought to the floor for a vote) but also substantially increase funding to agencies that enforce that sort of law.

"Without enforcement, the law doesn't do anything," he said.