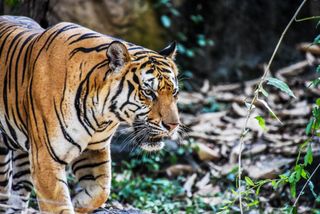 Calvin Klein's Obsession for Men is an oddly fascinating lure for big cats. Now officials in India are using the 1990s-era cologne to lure a "man-eating" tiger.
(Image: © Shutterstock)

Officials in India are considering using Calvin Klein's Obsession for Men to lure a "man-eating" tiger to its doom.

The cologne has been purchased but not yet deployed in the hunt for the tiger, which is suspected to have killed five people in the past year and another eight since 2016, according to AFP. A hunt for the tiger launched last month, the news agency reported, but the animal has not yet been spotted.

So, where does a notorious 1990s-era perfume come in? Well, Calvin Klein's Obsession for Men has been used to intrigue big cats since at least the early 2000s. It all started with the Bronx Zoo, which, like many zoos, uses scents in its big-cat exhibits to enrich the habitat for the animals. In 2010, Patrick Thomas, the curator of mammals at the zoo, said in an interview that of the many scents used and tested by the zoo, Obsession for Men was the "hands-down favorite" of the tigers and cheetahs. [Iconic Cats: All 9 Subspecies of Tigers]

The musky scent kept cheetahs intrigued for 11.1 minutes, longer than Nina Ricci's L'Air du Temps (10.4 minutes) and Estee Lauder's Beautiful (2 seconds), The Guardian reported at the time. A perfume creator told The Wall Street Journal that the secret to the cats' obsession with Obsession might be that the cologne contains synthetic compounds based on the excretions of the civet cat, which help provide the cologne's musky notes.

Field researchers also use Obsession for Men to mark their camera traps, luring animals such as jaguars close enough to trip the shutter, according to Scientific American. Scent markings often prompt big cats to rub their cheeks against the smelly spot, leaving behind bits of stray fur. Biologists can then swoop in to sample that fur for DNA and other testing, according to Thomas.

Tigers and humans compete for resources in rural India, but tigers rarely deliberately hunt humans. According to the BBC, tiger attacks kill or injure about 85 people per year in India, and most of those attacks occur when a person accidentally startles one of the big cats.

In a few cases, tigers lose their fear of humans and see them as prey. Officials in the state of Maharashtra believe that is what has happened with the "man eater" they are now hunting. In September, India's Supreme Court gave the go-ahead to forest patrols to shoot the female tiger, known as T1, on sight. Conservation groups have protested the ruling, especially because T1 has two cubs.

India is home to about 2,200  wild tigers, according to the country's National Tiger Conservation Authority. In recent years, a rising number of tiger deaths been reported in the country, the BBC said in 2017. The year before, 120 tigers were found dead, up from 80 in 2015. Poaching and the killing of tigers in retaliation for livestock deaths are two major threats to the endangered cats.