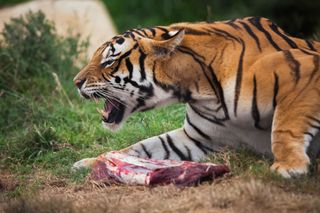 A Bengal tiger has been blamed for several deadly attacks on humans in northern India.
(Image: © Nolte Lourens / Shutterstock.com)

Dark reports began circulating in December, after the mutilated body of a 65-year-old man was found in northern India. Since then, nine additional human deaths have been blamed on "Mysterious Queen," the name given to a large Bengal tigress with a taste for human flesh.

The exact identity of the tiger hasn't yet been established — wildlife officials aren't even sure if it's one tiger or two — but that hasn't stopped villagers in India's Uttar Pradesh and Uttarakhand states from taking extra precautions when venturing outside their homes.

Wildlife attacks like these have been increasing in a few parts of the world, and some experts believe, for a number of reasons, that humans — unaccustomed to being prey — might start appearing on more predators' dinner menus in the future. [In Photos: The 10 Deadliest Animals]

The latest tiger-attack victim in India was Ram Charan, a 45-year-old irrigation contractor working near Jim Corbett National Park, a reserve established in 1936 to protect the region's iconic Bengal tigers and other wildlife.

Charan was walking through the forest near his truck when a tiger attacked him, according to news reports. "People rushed to his rescue on hearing his screams," a local wildlife official told the Times of India. "But he was dead by the time they reached him."

The tiger might have attacked a human out of desperation, one local official said. "The animal has started attacking humans, because it is not getting its natural prey," Rupek De, chief wildlife warden of Uttar Pradesh, told the Associated Press.

Indeed, when a carnivorous animal attacks a human, experts often point to a low population of the animal's usual prey. In a study detailed in 2013 in the journal Human-Wildlife Interactions, researchers at the Berryman Institute of Utah State University examined attacks by leopards in and around India's Binsar Wildlife Sanctuary.

The researchers found that leopards had been forced to kill livestock in the study area. "The high depredation rate [of livestock] was the result of the low density of wild prey species in the wildlife sanctuary," the study authors concluded.

Chillingly, the researchers also noted that hungry leopards in India had found another source of meat: "In the absence of wild prey species, leopards tend to become man-eaters," the study authors wrote. "The entire hilly region of Uttarakhand state has been historically known as an area where man-eating leopards exist, and they may exist all across the hill districts of Uttarakhand."

People living in India have another reason to be concerned: Wildlife census reports revealed the number of leopards in the country had increased markedly, from 6,830 in 1993 to 9,850 in 2001.

Not enough to eat

The lack of prey species — whether caused by human poaching or competition from other carnivorous species — is also forcing predators such as tigers, leopards and bears to travel farther to find sustenance. [Fierce Felines? See Photos of Endangered Indian Tigers]

Wildlife officials believe that if one tiger is responsible for the 10 recent attacks in northern India, it probably traveled about 80 miles (130 kilometers) in search of food.

And more of these predatory animals seem to be on the move, according to numerous reports. Though they were once hunted to the point of extinction, during the 20th century, the populations of many apex predators — carnivores with few or no predators of their own — rebounded, due, in large part, to endangered-species protections.

"When I was a boy growing up in Florida during the 1950s, alligators were endangered, and I never saw one outside of a zoo or Everglades National Park," Michael Conover, a wildlife management expert at the Berryman Institute, wrote in a 2008 editorial in the journal Human-Wildlife Conflicts. "Today, alligators are abundant throughout the state."

Similar success stories with wolves, bears, cougars and other predators have resulted in human-animal encounters that don't always end well for the human. During one deadly week in 2006, three Florida women were killed and partly eaten by alligators in separate incidents.

The month prior to the alligator attacks, a 6-year-old girl in Tennessee was killed by a black bear, which also injured the girl's mother and her 2-year-old brother. As the population of black bears has grown nationwide, a greater number of bear-human conflicts have been reported. [See Photos of the Black Bears' Return]

And as the number of gray wolves in the United States has soared in recent years, the Department of the Interior may drop the animal's endangered-species status — a move that's setting off howls of protest from conservationists.

"As we begin to recover a population of large carnivores, then it becomes a decision that the public has to make about how they're going to interact with them and where they're going to tolerate [these] species," Wildlife Conservation Society scientist Jon Beckmann told Live Science in a 2013 interview.

There are some people who claim that predators can develop a taste for human flesh after trying it once, which may explain why one individual animal is sometimes responsible for several human attacks.

"Since human blood has more salt than animal blood, once wild animals get the taste of salty blood, they do not like other animals like deer," Maheshwor Dhakal, an ecologist at the Department of National Parks and Wildlife Conservation in Nepal, told CNN.

Dhakal was responding to concerns about 15 deaths in Nepal caused by leopard attacks in 2011 and 2012. Most of the victims were children, which is typically the case in wildlife predation of humans — experts have found that the animals generally attack smaller, younger people or those traveling alone or with just one other person.

But the single greatest contributor to animal attacks on humans is probably the encroachment of humans into animal habitat. The population of Florida, for example, has increased from about 6.8 million in 1970 to almost 20 million today. And India currently has 1.2 billion residents and is undergoing rapid development nationwide.

With so much interaction between humans and large wildlife, the two groups are losing their fear of each other.

"Fifty years ago, if somebody saw a wolf, they'd be terrified, and they would go inside and bolt the front door of their house," Conover told CNN. "And now, of course, people travel to Yellowstone National Park to see one, and they get as close as they can to get a good photograph."